In Ghost of Tsushima, Sucker Punch’s latest game, you play as Jin Sakai, a young samurai out for the adventure of his life. He is the ward of Lord Shimura, Jito – meaning land manager – of the island, and has enjoyed the best tutoring available, both in the art of war and the art of the samurai.

Lord Shimura expects Jin, his nephew and last of clan Sakai, to follow his example as honorable warrior of Tsushima. Jin gets that chance when the Mongols decide to use Tsushima as staging ground for their invasion of the Japanese mainland. Suddenly, Jin finds himself all alone, facing an army to save his people and those dear to him.

The game is comprised of three Acts whose main missions are set in three different parts of the island that you get to unlock once each Act begins. From a storytelling perspective, the three Acts of Ghost of Tsushima are very well planned out, each main mission bringing Jin closer to his goal of driving the invaders out, at any cost.

There are three types of mission you get to pursue, apart from many other activities that will have you explore all over the island.

There are a ton of places to explore on the island!

The missions
“Jin’s journey” details his journey from inexperienced yet capable samurai to becoming the legendary Ghost of Tsushima. While Jin is a good strategist and decent fighter, he will need allies to help him win this war. The story – interrupted at opportune times by Jin’s childhood memories – is the classic hero’s journey. The invasion rocks the foundations of Jin’s world, but help arrives in the shape of thief Yuna, who becomes his first ally and mentor. And as he progresses through the story, he proves himself to be an insightful leader and caring friend, as well as determined to do what needs to be done, without realising all of the consequences of his actions.

“Tales of Tsushima” encompasses the companion quests and other personal side quests found while travelling the island and by speaking to the people you meet. You will free villages, liberate hostages, even fight at sea. Bonus: You can follow up with the people you aid, which I thought a nice touch. There is one side quests, though, which is kinda tricky, in hindsight. You can either kill a bunch of thieves or steal back what they stole without being seen.If you choose the latter, their victim will unfortunately fall prey to them later, which I thought a very sad touch. But then, Ghost of Tsushima certainly does not shy away from the horrors of war and occupaction. Which is a plus, in my book.

There are also Mongol camps to destroy, more prisoners to free, hot springs (onsen) to dive into and shrines to be honored. Also, you can collect crickets from cemeteries to learn tunes you can play on your flute. Nice.

Jin posing in his kensei armor next to an Inari shrine.

While destroying Mongol camps unlocks more of the specific region, freeing prisoners will gain experience and hints on where more camps may be found. In the beginning, Jin will be hard pressed to stand against the Mongols in open conflict. But he will learn techniques to improve his fighting style and, if you play it smart, you will be a force to be reckoned with already during Act I. Read up on Combat Rules and Enemy Classes here.

“Mystic Tales” are the last mission category. They are unlocked by finding a musician and listening to his grand tales of warriors long gone. They are essential to progressing your combat skills, as they will provide you with a long-bow, special combat moves and special armor. While most of these tales will culminate in an especially hard-fought Duel, the last one will challenge your orientation and climbing skills.

Activities help you develop your health and skills
Finding hot springs and using them to relax and reflect on events will increase your maximum health bar, while finding beautiful spots to write haiku – poetry – will also benefit Jin. Bamboo strikes will strengthen your resolve, filling a bar that allows you to perform special moves later on and take more of a beating during fights. Once fully developed, you will even be able to revive yourself.

Once you have unlocked all Inari charms, visit more shrines to strengthen them.

Shrines come in two forms: Inari shrines, which you will find with the help of fox guides, and Shinto shrines, which will require you to climb, hop and swing about mountains, trying not to fall into the abyss. Visiting shrines will provide you with charms that boost certain traits. Stealth charms may let enemies detect you more slowly, ranged charms will hone your skill with the bow and so forth. You can unlock six charm slots in total and replace charms at any time.

Once you unlock all six charm slots, you are awarded with this trophy.

Then there are the Pillars of Honor, erected in memory of the samurai of Tsushima. There, you will find beautiful skins for your katana and tanto.

Last but not least, light all the light-houses of Tsushima to let the Mongols know you are coming for them to reclaim the island. 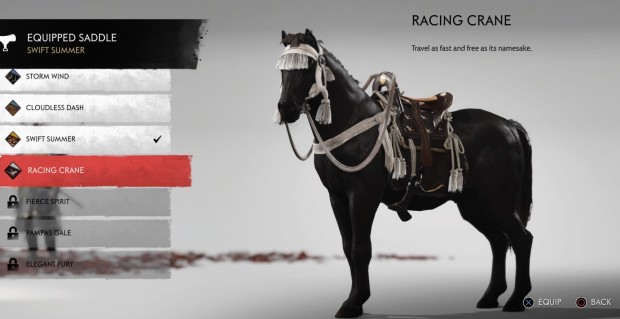 Also, while travelling across the island you will rely heavily on your war charger. Finding banners will unlock new, colorful saddles and bridles for your horse. These banners can be found in Mongol camps and across the island, on beaches or mountaintops. The saddles are just cosmetic, by the way.

You can choose your steed at the beginning and name it, too. Your horse becomes your companion on the long treks exploring across the isle and you will grow as attached to it as Jin does. Loading levels will be hidden behind cute interactions of the two after missions, too.

Anyway, all these benefits will entice you to explore the island in full and Sucker Punch has found beautiful ways to help you get where you need to go.

Exploring Tsushima
In the beginning, you will learn that – symbollically speaking – the wind is Jin’s father, guding him, the birds in the trees his mother, keeping watch. While Jin can actively use the wind to bring him to his chosen destination by the most direct route, the golden birds of Tsushima will sing to him to get his attention whenever he is close to a mission or activity. Follow them to find all of the activities mentioned above.

Golden birds will fly in to get your attention close to certain missions.

Look out for interesting land marks, rock-formations, columns of black or white smoke, fireflies, flocks of black and white birds and even tall banners. You will stumble across a dueling arena that speaks of tragedy, a cold-blooded murderer and more.

Flocks of white birds indicate a place fit for composing a haiku.

There are also supplies and crafting components you need to gather to upgrade your gear. There was one time, actually, when I spotted a lone chest and went to investigate, only to find the Mongols had set a trap. I was delighted!

Also, with each new Act enemies will give you more grief, especially at higher difficulties. I played on Easy and Medium so far and I will definitely be trying it on Hard, too. 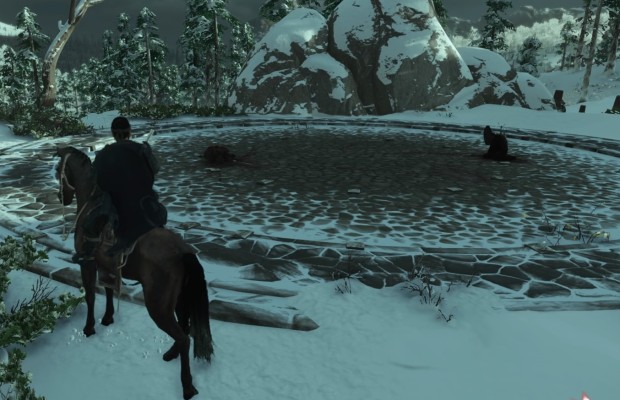 Jin’s companions – The Thief, The Archer, The Mother, The Crook, The Smith, The Monk and The Ronin
During the first part of the game Jin has to secure the aid of the last warriors of Tsushima. Those are master archer and samurai Sensei Ishikawa, the unstoppable Lady Masako Adachi, a samurai’s widow, and Ryuzo, sword for hire and Jin’s childhood friend. 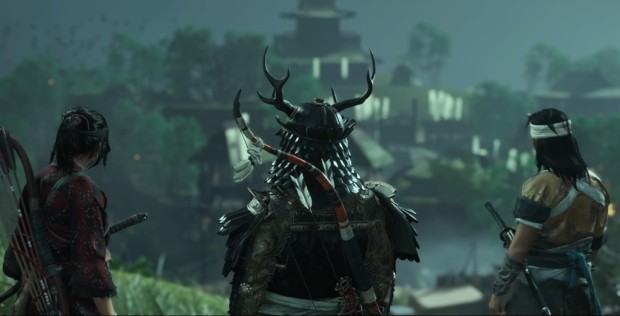 Then there is Yuna the thief, who introduces Jin to some tricks that will help him overcome the overwhelming Mongol hordes, and an acquaintance of hers, the sake seller and crook Kenji. Later on Yuna’s brother Taka will join the company. The last companion, then, is warrior-monk Norio.

Each of these companions has their own story, their own burden to bear. And without wanting to give too much away, I especially loved the companion quests of Lady Adachi and Norio. They go through the most drastic changes during what I will refer to as strictly companion quests. Though there is one more and that one is a real mess.

This has to be the cutest way to wake up in any game I know.

What I love about Ghost of Tsushima
Ghost of Tsushima is a gorgeous game – photo mode is a thing, too, of course – the story and its characters are compelling and I really enjoy the challenge of combat. Can I take down everyone in this fort without being killed myself? Can I do that mission more stealthily? Do I dare to challenge that group in open combat? This really is the appeal of the game for me and, as mentioned, I will definitely play it at least one more time, once I am finished with my second playthrough.

One thought on “Ghost of Tsushima – Becoming The Legend (Mild Spoilers)”