The Council, a narrative adventure, released its first episode “The Mad Ones” on March 13th and while The Council promises to become an enjoyable game overall, it was not love at first sight. This episode had to grow on me a bit, but I have just finished my third playthrough, which was actually a lot more fun than the first.

Let’s have a look at why that is so. 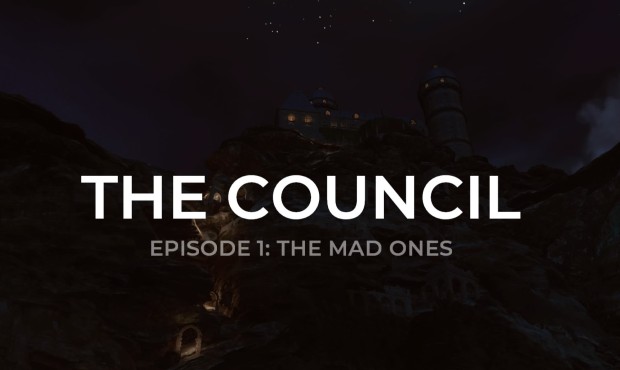 Let’s dive into Epiosde 1: The Mad Ones

The narrative
The Council‘s narrative setup is your classic and therefore boringly cliché “secret society dabbling in world polictics”-background.

(Man, I wish people would finally come up with something different.)

The game tries, actually, to spin it a little differently, by introducing the mother-son-duo Sarah and Louis de Richet. They are members of the French branch of the internationally active secret Golden Order. The prologue not only features them working in tandem to get out of a tight spot, it also features a first glimpse at what makes The Council interesting and fun: with every action, every decision or dialogue choice, the player shapes the character and the character traits of Louis, who (unsurprisingly) turns out ot be the main protagonist.

(The game is not very consistent when it comes to French accents, by the way, some supposedly French characters have French accents, some, like Louis and his mother, don’t.)

Louis finds himself inside a stunning manor among a crowd of illustrious guests, among them, you may have guessed by the classic looks, Napoleon Bonaparte (the guy standing to the left).

In the first episode, Louis, tasked with solving a mysterious disappearance, sets out on his own and travels to the island of the mysterious Lord Mortimer. Once arrived, he meets a host of other, rather prestigious guests, who may or may not be allies of the Order and who might or might not aid him in his task of solving the mystery. It is up to you, the player to find that out.

(On a side note, a week ago I started playing Assassin’s Creed Unity again, which is set in that same time period, and I am pretty sure that the dress the Duchess is wearing or rather almost bursting out of does not really fit in there. But then, she is British. Maybe that’s why. Or, maybe, it’s because every game needs a hypersexualized female NPC? Ah, wait, what century is this again? Suffice to say, I am really sick of that. It’s annoying, boring and totally unnecessary in terms of characterization. And the next time I see a trope like that my eyes really WILL roll out of my head! Even though the Duchess has her reasons.)

The manor offers very beautiful interiors, like this library, which you are, lamentably, not entirely free to explore.

“The Mad Ones” is basically what you’d call exposition, where Louis is given multiple opportunities to get to know his fellow guests better. Mind you, this is not an action-adventure, you will therefore be required to talk a lot and to explore the manor, to which you will be confined over the course of the episode, but which features some stunning interiors and exterior views.

Lamentably, you are not allowed to freely explore the manor either, which I think is a bust. But the dialogues are very much fun and you will find yourself in a so-called confrontations almost each and every time, where you will have three to four shots at convincing the other person of something. Depending on your specialization, talents and character traits, you will have different options to choose from.

Success! Not every Confrontation goes as planned, though, which is why on later screenshots Louis will sport a rather ruined face.

(Has anyone played Life is Strange: Before the Storm? This is much like the Back-Talk-Challenges Chloe has to do, but far more complicated than just listening to what the other person says.)

Each of your choices, each of the confrontations you have will influence the story, or so the game promises. You can see how you fared after the end of each chapter and at the end of the first episode.

The more you find out about a person, the better. Here are Duchess Hillsborrow’s Vulnerability and Immunity.

Also, certain actions will reveal more of Louis’ character traits, like Trusting, Reliable, Boorish or whatever. Those are his Vulnerabilities and Immunities and define how the other guests perceive Louis.

That said, the story is actually the least interesting thing about this game. So let’ s get on to the gameplay.

The gameplay
The Council is a narrative adventure, which means that you will spend your time finding and interpreting clues, listening in on conversations, reading letters and observing people to learn about the motives, weaknesses and immunities of your fellow guests in the manor.

Here are the three different classes you can choose from. I picked Detective first and played again as a Diplomat and as an Occultist.

At the very beginning of the episode you will choose Louis’ class: he can be either a Diplomat, eloquent and well versed in ettiquette and politics, an Occultist, whose knowledge of arts and science as well as his ruthlessness is of advantage, or a Detective, who may not be a great orator, but vigilant and observant and therefore well equipped to find hidden clues.

I chose the Detective (albeit a pretty naive one) for my first playthrough, there is a mystery to solve, after all, on my second I tried my hand at being a (rather ruthless) Diplomat, on the third I was a rather outspoken, angry Occultist and, based on my choices, I got three very, very different endings, which was, quite frankly, amazing. 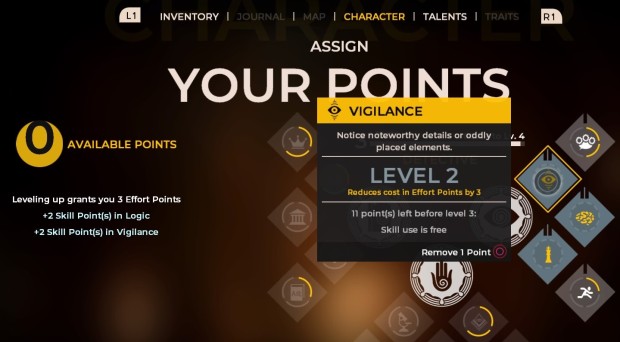 As you can see, apart from actively levelling up your class’s skills, Detective in this case, you passively add to the skills of other classes.

Your class comes with a set of skills, like the Detective’s Vigilance, Agility or Logic, that you can actively level up using skill points, but certain actions will lead to giving points to traits of other classes. If you manage to obtain that skill, you can also develop it further, which is great.

Skills will open up different dialogue options during confrontations, but will also help you when observing characters or objects. Unfortunately, the game also taunts your lack of skills, which means that during some of the scenes messages will flash, telling you that you’ve missed an opportunity due to lack of whatever skill. Which is annoying. I made a choice, after all, when I picked my class, and I would like to discover the different approaches by myself, thank you very much.

To gain skill points, you have to perform certain actions to unlock character talents and read the books you find throughout the manor to educate yourself, which I thought delightful!

To use skills, you will sometimes have to spend Effort Points. Royal Jelly helps you regain those. Another concoction reveals your contrahent’s Vulnerabilities and Immunities during conversation for a limited period of time, but so far I have been unable to put that to good use. Once revealed you can exploit Vulnerabilities at any time.

The exploration, putting clues together and exploiting them during conversation is what makes this a fun game. Actually, it reminded me a fair bit of the Sherlock Holmes-titles by Frogware.

(By the way, who else is looking forward to The Sinking City?)

Again, compared with Life is Strange or, indeed, the Sherlock Holmes-games, The Council takes narrative gameplay to another level. Less emotional, maybe, but I like that rather logical approach to achieving your goals.

So, despite my initial misgivings concerning the cliché story and tropes, as well as some animation flaws and the nagging question, why this episode is actually called “The Mad Ones”, I shall continue playing this game and am looking forward to finally meeting some more of the illustrious characters.

Until then, keep on playing.