I had been looking forward to playing GreedFall – from the same studio behind the surprisingly intriguing The Technomancer – ever since it was announced. The trailer instantly had me hooked and I was totally invested in the tale of saving the savage yet beautiful island of Teer Fradee before I had even put hands on the game.

Now, having racked up quite some playthroughs of The Technomancer I could not help but compare both games. First things first: GreedFall is a major improvement over the previous game by Spiders, yet there are still some annoying and sometimes infuriating issues I have with this game. Which is why, to my mind, it is just short of being a truly great game.

So here it is: the good, the bad and the ugly truth about GreedFall according to yours truly. Beware of minor spoilers.

What’s good about GreedFall? Beautiful settings, meaningful choices, interesting characters and lore
The world of GreedFall, or rather, Teer Fradee, the island where the majority of the game takes place after you’ve finished the prologue/tutorial stage, is a true beauty. That said, GreedFall is not an open world game. Regions become available only once a mission requires your presence there.

And while you will be able to establish various camps in any given region, one look at the vast map will have you yearning for an actual open world. That said, each of the regions, be it New Serene, San Matheus, Hikmet or any of the native tribes’ homelands, are beautifully crafted, if a little repetitive, especially when it comes to buildings and beasts. My favorites, BTW, are the mountain regions with their autumn forests. Lovely.

Teer Fradee is a place of magic, where the natives live in harmony with nature.

Also, the game’s message is very en vogue with its focus on the consequences of exploiting the earth we live on. While the setting itself – noble savages face extinction by greedy colonists – is certainly not new, I believe the origins of the Malichor, as explained by the island god with the unpronouncable name, along with the main villain’s story arc, send a powerful message I could certainly get myself behind.

Character and customization
Thrown into the world of GreedFall, the player comes face to face with its hero/heroine, the lord/lady de Sardet. Yep, that’s right, you can choose a gender, which is one up over The Technomancer. One point in favor.

As you progress in the game, you will be able to spend points on Skills, Attributes and Talents. Some are crucial to your chosen class, others a bonus. So choose wisely.

Now, you will be able to not only customize your character’s appearance but also choose a class: Warrior, Technical, Magic. Though, truth be told, Technical is really the Rogue class. My first playthrough saw me land on Teer Fradee as magician and two-handed weapons-expert Lady de Sardet. That’s right, you can wield a weapon even if you choose the magic class, through you will probably find, as I did, that using magic is actually always the better option. I found that especially true during the very last boss fight.

The Companions: Warriors, Rogues and Mages
De Sardet is sent to Teer Fradee as legate – read: chief diplomat – of the Merchant Congregation, one of the six factions you will encounter in this RPG. The others are the science-driven Bridge Alliance, the clercial country of Thelemé, the mercenary Coin Guard, the – equally mercenary – Nauts and the Natives of Teer Fradee.

GreedFall is all about diplomacy paired with solid action and establishing relationiships. I like it!

The Bridge Alliance and Thelemé are at war on the continent, while the Merchant Congregation assumes a neutral position. All three continental factions, though, have an interest in Teer Fradee. Your interest, as legate, is to find a cure against the Malichor, an illness that is spreading all over the continent. The Bridge Alliance also is seeking a cure, while Thelemé is more interested in converting the “savage” natives, with rather ruthless enthusiasm. The Coin Guard and the Nauts serve all three of these main factions and, ultimately, their own ends.

Naut captain Vasco, left, and Coin Guard captain Kurt, right, are the first of de Sardet’s companions. For whichever reason, though, they will come into the game already suspicious of the legate.

Now, unsurprisingly, de Sardet’s companions will be comprised of a member of each faction and represent a specific class:

The fact that only one of the companions is a Warrior, I assume, is attributed to the fact that most players will choose the Warrior Class themselves. I, on the other hand, will almost always choose the mage class. Dont know why, really. I just like it. Rogue comes second place, warrior last. 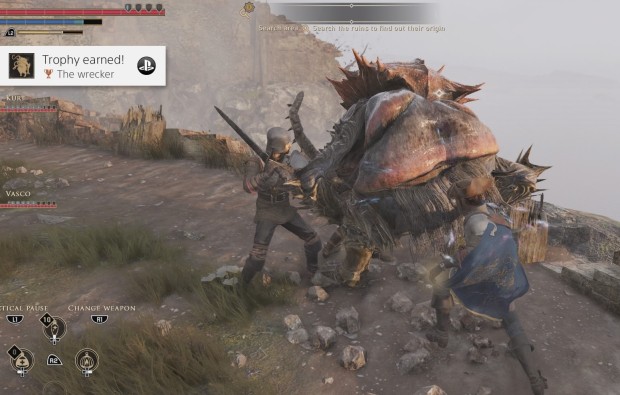 The combat is solid, and especially the giant guardians, the Nadaig, prove quite a challenge at times.

Each of the companions comes with his/her own perks that they bring to your team, such as science, lockpicking, vigor and so forth. They also serve as ambassadors and advisors. Meaning it is a good idea to bring along the companion belonging to the faction you are about to deal with. Alas, you will only be able to bring along two companions at a time. During the inevitable companion quests, one of them will be set, regardless of which faction you will have business with.

Nevertheless, the companion’s stories are all very engaging. You will encounter tragedy, deceit and despair, but also find satisfaction in accomplishing all of their quests and having them call you their friend. There is, of course, also the option of taking your relationship to one of the companions even further. Among the companions are several love-interests, though I have yet to find out how to woe them.

Good relations with companions and factions are the key to success in GreedFall.

Diplomacy and making the right choices is key
As legate, de Sardet will be tasked with improving relations with and between Teer Fradee’s major factions: The Bridge Alliance, Thelemé and the Natives. Your goal should be to have at least a friendly relation with all of them, as they will aid you during your missions and be more open to your suggestions. I found that a diplomatic approach always served me best.

Somewhat carefree Constantin d’Orsay, de Sardet’s cousin, is the one giving the orders, him being the new governor of the Merchant Congregation on Teer Fradee.

Unfortunately, there are people within the factions who will try to drive their own agenda onward, even use you to achieve their goals. These double-dealings and coping with their consequences, maybe even rectifying them, will keep you busy and highly entertained during most of the game. It is up to you whether to solve these conflicts by force or use a diplomatic, discreet approach in order to not offend your newfound or future allies. During my first playthrough, I did just that, though the learning curve was certainly steep. I liked that very much about GreedFall and I believe it is its major point in favor.

One of the most exhiliarating missions was finding and defeating the mountain guardian (left).

What’s bad about GreedFall? Repetitive tasks, boring architecture, lack of real decision-making
When it comes to the story, I had some trouble remembering de Sardet’s actual goal – finding a cure against the Malichor – after some time, because most of that is spent running around on missions you are given by other characters. And while you will be able to determine how you tackle a given task, you do not have the freedom to decide for or against a mission and choose an alternative approach. The great and therefore very surprising and rather non-sensical exception is the very last choice you have to make.

This gruesome sight leads to one of the more frustrating encounters with one of Thelemé’s inquisitors, who I should never meet again, even though he seemed a prime candidate for becoming one of the game’s many villains.

At times I felt like an errant boy, running from place to place, talking to that one aggrieved party and placating, intimidating or corercing the other. Especially during one mission that was apparently included just to annoy me. I had to run around the map several times to verify land claims and look at contracts with both my old professor and the former governor of the Merchant Congregation. That may be less painful when playing only the main quests, but where is the fun in that?

So, yeah, that is what annoyed me the most. 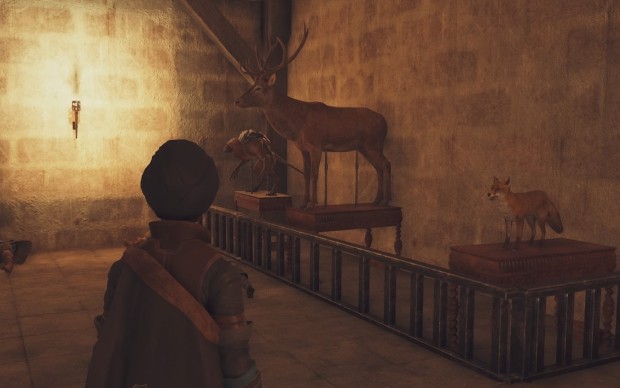 Where fox and deer meet… You will frequently encounter these two all around the regions, the deer leading you towards mission objectives, the fox pointing the way towards camps and other useful stuff, such as skill point altars. To see them stuffed and on display in this exact place is, actually, quite a sad sight.

There is something else, though. While GreedFall may not gain top rates with their character animation and graphics, it does what it can to create rich characters with not quite shallow backstories. And yet, many a time it gives away the chance to engage the player even more. For example, at one point, de Sardet and companions are being invited to spending a nice evening with the natives. And since I was looking forward to actually seeing the natives’ customs, their interaction with de Sardet and the companions outside of a given mission, that event was abruptly cut short. The next scene had everyone gushing over how nice and interesting it had been. Really? I would have loved to see that, you know? Unfortunately, that happens very often in this game, that crucuial events happen off-screen and you are left with the annoying feeling of just having missed something important. That can be the surprise arrival of the enemies having set a trap for you and your allies, or some conversation that could have brought some depth to the story.

Also, the architectural design of the cities is extremely boring and repetitive as far as the interior design is concerned. In every governor’s residence you will have the exact same layout, the exact same portraits and much of the same decor. Which is incredibly boring.

Travelling can be a pain, as the region maps are at times extremely confusing. I had to refer to the map constantly to check whether or not I was even close to my given task.

What’s ugly about GreedFall? Nothing, really. Apart from the map.
Admittedly, I grew extremely annoyed at times, especially when travelling. While you can fast-travel from established camps to discovered areas and to your residences inside the major cities, while travelling across a region you will have to run around sometimes labyrinthine paths that will have you check your map every few seconds. How many times did I find out I was headed in the completely opposite direction for the past five minutes, or could not even find the indicated location on the map, because it was in a totally different area of the region! Really, really annoying.

Also, your companions will almost always be in your way in tight corners and sometimes freeze and just stand around during a particularly tough fight, which is also extremely frustrating. So, Spiders has certainly improved their game since The Technomancer, but there is still a way to go until they reach excellence.

The Verdict
Having played GreedFall once so far, I am intrigued enough to give it another try, to overcome my feeling of annoyance and set new goals, such as romancing one of the companions, which I failed to during my first playthrough, and playing some of the faction missions differently, to the end of annoying every single one.

Also, I will be writing another, more detailled post on customizing your character and your companions.

One thought on “GreedFall – The Good, The Bad And The Ugly (MINOR SPOILERS)”