There is something extremely thrilling and utterly satisfying in just rolling through a game like nothing can touch you. You’ve sunk hours into learning the combat system, sure, summer has gone without you noticing, but, hey, you’re the boss now!

Let’s face it: Essentially, games exploit our need to prove ourselves. And once we’ve tasted succes, we crave more, more and even more. We want to be best, first, richest, smartest, fastest, strongest.  And, of course, we want to look good. Or at least cool. Games make us want all of these things. And they do so in sometimes more and sometimes less obvious or clever ways.

Here is my look at how games turn us into mindless, slavering zombies hanging on to the device of our choice and trying to just get there.

Endless exploration
Curiosity killed the cat, they say, and, yes, of course us explorers want to know what’s over there, in the furthest patch of the map that we haven’t managed to go get a closer look at just yet. No mountain high enough, no chasm too deep. That’s me. 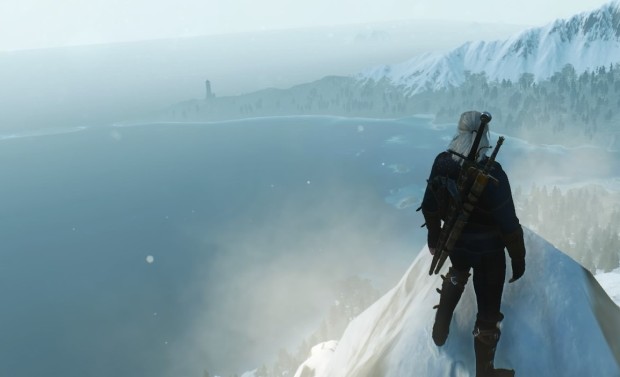 There’s a mountain? I’ll try to climb it, that’s for sure. Geralt of Rivia, hiking on the Skellige Isles.

A friend of mine, on the other hand, got lost on the map of Fallout 4 and hates it because she says she needs a game that gives her a clear objective. She does not want to just walk around and satisfy her non-existant curiosity as to what might be hidden behind that next hill. She wants a storyline that gives her direction.

I love to explore. I explored every inch of the map of The Witcher III and, by now, am spoiled. Spoiled in such a way I think I can’t really appreciate non-open world games any longer. Which is a shame.

Collector’s items
Collecting things has always been an essential part of gaming. It is something primal, compulsive, wired into our genes and the one thing none of us can resist. Which is why I find myself picking up absolutely everything, useless or not, whenever I play through Dragon Age Inquisition, which always ends up with me having to destroy most of the items because I cannot fit any more into the inventory.

And I absolutely love the Thief-Reboot, because, as you can see in the video below, it allows me to release my inner cleptomaniac (Disclaimer: I never stole anything in real life!).

Of course, true collectors strive for obtaining the ultra rare pieces, the extra special armor, sword, gun or whatever. Speaking of Thief, I myself thought I could satisfy that peculiar ambition by claiming every single collector’s piece. “Unfortunate circumstances” prevented me from finding all of the collectibles (I was too terrified to search through the entire Asylum and missed some more on the final missions.).

On the other hand, I really enjoy collecting all the schematics for Witcher gear and having them crafted.

Fashion whims
Ah! Fashion. Remember Geralt of Rivia trying to pick an outfit for his audience with the emperor of Nilfgaard, opting for “anything, as long as it’s black”. I love fashion ! So, every time I play Assassin’s Creed II, I will certainly equip the classic white Assassin outfit when I go to fight Rodrigo Borgia in the final boss fight in Rome. And I always dress according to local fashion, be it in Florence or Venice or any of the other Renaissance cities. 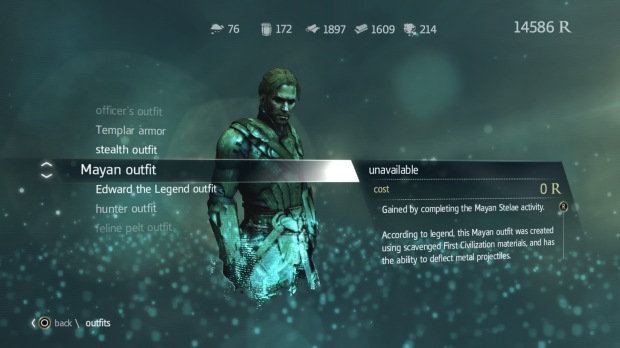 In Assassin’s Creed IV Black Flag I coveted this Mayan outfit which you get if you collect all the Mayan stones. And it looks rather good on Edward.

Of course, game developers have recognized the need to make a character look really cool. Some look badass by default, e.g. Adam Jensen from Deus Ex-Human Revolution. Others have to improve their crafting skills or garner better materials to achieve coolness.  But, the Sentinel armor in Dragon Age Inquisition? Absolutely stunning! 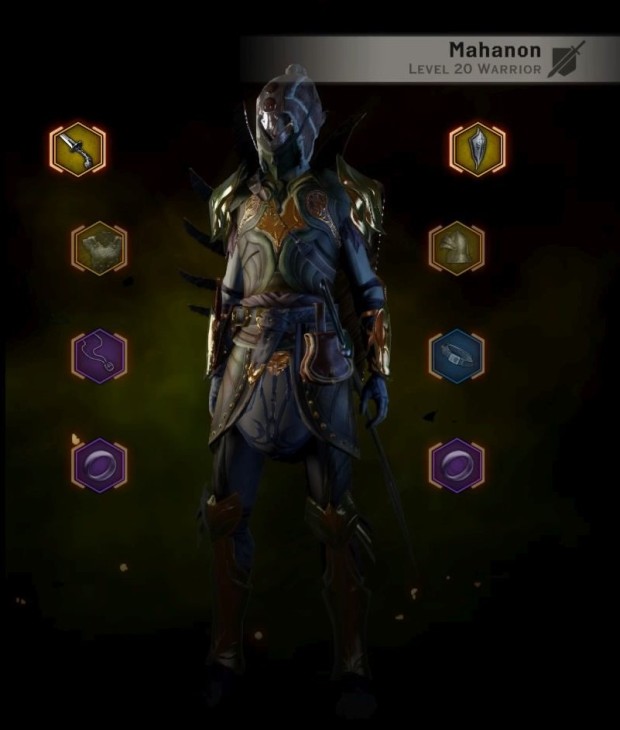 Mahanon is not only my favorite Inquisitor among those I have created and played, he’s also the best-dressed.

Herbal Highs
Herbs. They are so underrated. I mean, really? But: since collecting herbs is an essential part of RPGs, be it The Elder Scrolls: Skyrim, Dragon Age or, for example, Shadow of Mordor, I have come to accept that particular quirk. So far nothing, really nothing, compares to The Witcher. Truly, I hate it. But the lengths you’ll go to for finding Felandris, Winterstalk, Buckthorn or whatever, just to make sure you have the right ingredients for some potion, bomb or whatever? Incredible. Or rather, a nice example of cross-marketing, for some quests rather depend on your finding the right herb…

Combat connoisseur
Usually, I suck at combat. I don’t know which weapon to use, I don’t know how to dodge, basically, I just push buttons and repeat the fight over and over again until I have achieved victory. That’s how I beat Splinter Cell: The Black List, a game I just bought because Elias Toufexis was in it. Same as Far Cry Primal.

There are very few games in which I have truly mastered the combat system to a point where I could beat almost every opponent with exceptional ease. Castlevania: Lords of Shadows 2 was such a game. After having played through roughly two thirds of the game I was beating the crap out of every howling demon that stood in my way without even breaking a sweat. I knew when to strike, and where, which power to use at what particular moment, when to dodge, when to attack. It was beautiful. 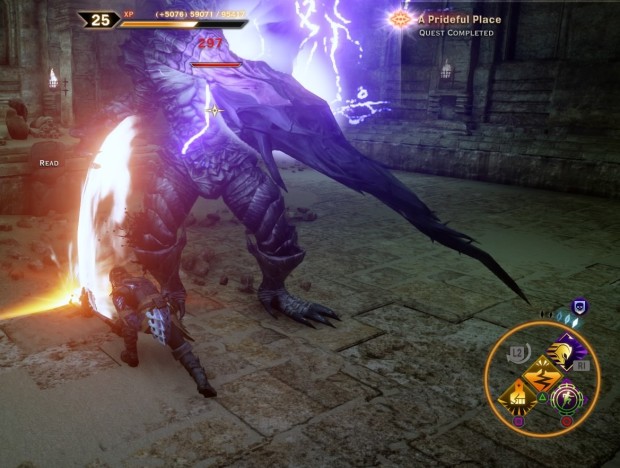 A not so rare combination of collecting and combat: First you need to collect enough shards to get into the Solasan temple, then you have to fight this pride demon, which was one of the hardest bosses I had to fight in this playthrough of Dragon Age Inquisition.

The only other game where I felt that powerful was Assassin’s Creed Brotherhood (Well, maybe Assassin’s Creed Unity too, once I had unlocked all of the abilities), but, let’s face it, that was cheating. Once I knew how to handle the dagger and throwing knives, I went on to beat my own records in the animus training chamber over and over again. Until I got bored. Which is why I really loved The Technomancer. Because the further you progess in the story, and the more advanced your equipment and abilities, the harder combat becomes.

Treasure Troves
Treasure! Wouldn’t we all like to be filthy rich? Of course we do! So games offer us gold or gems or credits or whatever currency they like, as both incentive (Achievments!) and actual resource. For of course you need some sort of currency to exchange for goods you’ll need to improve your health or amor or weapons, expand your lair or bribe officials, or simply to fulfill some quest.

I admit, I have yet to claim every sunken treasure in Assassin’s Creed IV Black Flag, but dear Edward Kenway, with his single-minded need for accumulating riches to prove his worth (which is actually very sad), was right down my alley.

Shooter’s Paradise
Shooters are insanely competitive, but, if you manage a particularly successful run, you’ll learn what the word “contempt” truly means. I remember playing Quake oh so long ago, me and two guys, hooked up in a local network on a hot summer’s day. We had played for hours and I was getting really good at it, so when one of them suggested we go online to the multiplayer arena, I was like: why not? Well. I never even got to fire one shot. Every time I entered the arena, I was dead on the spot.

Achievement Hunter
You get a trophy for earning every other achievement in the game. If that is not the epitome of competitiveness, I don’t know what is. So far, Assassin’s Creed Unity is the only game where I managed that on the PS4. I am working on Dragon Age Inquistion, where I lack only two trophies to earn that achievment. The Witcher III is another one where I could manage 100 percent, but the game is so vast I can’t be bothered to play the entire campaign another time just now. On the PS3 I am still hoping to earn every trophy on Deus Ex-Human Revolution, where I have managed 82 percent so far. But, is it really fun reducing gameplay to mere statistics? Actually, it is.

So, what’s your obsession?