I started this blog in June last year and now that D-Day is coming (the release of Deus Ex- Mankind Divided, in case you were wondering) I thought this might be a good time for sharing a few insights.

whatchaa.com in numbers
Ever since my first post, published on June 18th 2015, I managed to turn out an average of two posts per month. That’s 24 posts so far. Go, me!

Looking at my visitor stats, I count 425 visitors and 679 views so far. This being my first blog, I’ve got no idea whether or not that’s good, but then, I simply enjoy writing and like to share my thoughts with you. Hope that’s okay with all of you too. Oh, I also got some followers! I never thought I’d even get one in my first year. So, thanks for supporting me, I really appreciate it!

Also, most of you check up on what’s new on Sundays. Which means there’s a chance you’ll read this today.

More than games
whatchaa.com’s main focus is on video games, so the Games-category is the busiest. But I also let myself be inspired by games, be it in terms of music or books. Since I don’t listen to the radio anymore, I am a little dependent on people who share my taste in music sharing their favorite bands with me. For example, I discovered Code Elektro because we both like cyperpunk and he liked a post of mine on Twitter. Another follower on Twitter, Seciden, pointed me toward Imperative Reaction, a Dark Wave band I’ve since come to appreciate. I myself am a Glitch Mob-girl and  Nadastrom-fan, but I don’t only like EDM.  Bookwise, I love fantasy and cyperpunk. Two of my all-time-faves are William Gibson’s Spook Country and Zero History. So, shout out and keep the good stuff coming. Send me a DM on Twitter, or comment below, if you’ve got a tip you’d like to share. Don’t worry. I don’t charge for reviews.

Dishonored
I was sceptic at first, but the design is beautiful and unique and the story of the magically gifted assassin compelling, so I have not played it once, but twice and am still improving my stealth skills.

Splinter Cell – The Black List
There are games you play because of the story, and others you play for the adrenaline rush you feel after having finished another harrowing mission gone horribly wrong. This was one of them. I bought it only because I wanted to see what Elias Toufexis was capable of outside of Deus Ex-Human Revolution. I played it once and probably won’t play it again.

Dragon Age Inquisition
One of my favorite games. I think I a have memorised every one of Solas’s lines by now. More below.

The Witcher III-The Wild Hunt
I had never heard of the franchise before, let alone the books it is based on. Suffice to say, CD Project Red did such a great job I’ll probably buy anything else they produce, no matter the genre. Although I believe the upcoming 2027 is actually cyberpunk. Yeah! Did I mention I loved The Witcher III? One of the rare games that made me cry more than once. But, it is also one of those games I need some time to recover from.

Castlevania – Lords of Shadow 2
I think the very first Vampire-game I played was on MS-DOS. I can’t recall the name of the game, but, basically, you had to suck blood to regain vitality, evade attacks from your archenemy Van Helsing and reach your coffin or some dark corner come morning. Well. Castlevania-Lords of Shadow 2 is a different breed and I really enjoyed punching giant demons in the face. Great game. I am on my second playthrough so far.

Evolve
Apparently, I am not cut out for this sort of game. So, after roughly 24 hours of intense combat I put it away and never played it again.

Far Cry Primal
My first of the franchise. I loved the world, loved the stealth elements and the beast master missions, but after a while it became boring. On the bright side, Far Cry Primal introduced me to the music of Fever Ray. Played it once and am currently stuck on my second playthrough.

The Division
I am not made for combat and I detest shooters. Therefore, The Division was one of those games I played for the adrenaline rush, but, frankly, I gave up once I had reached level 20-something and haven’t touched the game since.

Bioshock Infinite
I just wrote I detest shooters, didnt I ? Oh, well. So I loved Bioshock Infinite, even though it is, in fact, a shooter. My excuse: Elizabeth. I did it for her. Only her.

Hitman
Another franchise, another first. I simply adore the episodic adventures, the settings, the stealth, the graphics, everything! My favorite episode so far is Paris. I love the urban, glamorous setting, the catwalk music, the range of disguises and opportunities. Sapienza made me want to immediately book my holidays in Italy and Marrakesh simply made me feel uncomfortable because of all the noise. So, let’s see what Thailand has in store for us!

The Technomancer
This was one of the games I discovered while flipping through the E3-coverage (Another one is Vampyr, but, so far, no release date has been announced). I bought The Technomancer because I thought it might get me into the cyperpunk mood ahead of the release of Deus Ex-Mankind Divided. It is cyperpunk, but it is not Deus Ex. So, after the inital phase of disappointment, I really came to appreciate the game. I am currently on my second playthrough, trying Hard this time. Wish me luck. I’ll need it.

Dragon Age Inquision is the all-time-favorite
I initially wrote I wanted to share some insights, right?

So, despite having already been released on November 18th back in 2014, I first started playing Dragon Age Inquisition on Christmas 2015. For the next three months, I pretty much played that game exclusively. It does not really take a genius to realise it is one of my favorite games.

As far as playthroughs go, I managed a few, though I am still missing the Nightmare run. Regarding the posts related to the game, namely Building Character Parts I and II, they have been in regular demand ever since they were published, making them the most popular on this site, which I think is pretty remarkable.

But then, trying out different races, classes, romances and, of course, options, where it comes to your choosing how to lead the Inquisition, is absolutely riveting. 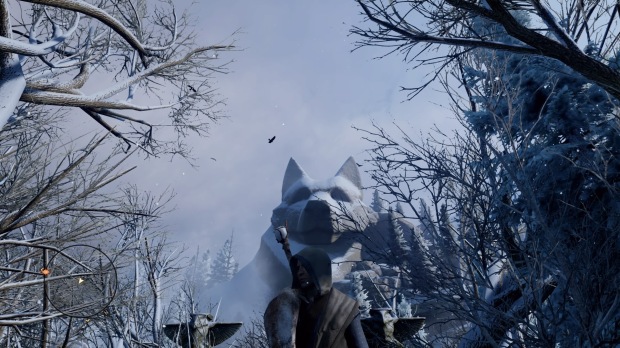 One of the most powerful images of Dragon Age Inquisition.

What more?
I truly enjoy playing games and writing about my experiences. But I also know there are tons of other sources out there that have reviews, mission playthroughs and whatever else you may desire. What I want to focus on is my personal experience and, as you can read up on in the About-section, characters, language, marketing, design, music and fashion inspired by games.

Nevertheless, I appreciate your input. So, if there is something you’d like me to write about, just let me know.