This is the second of my favorite missions, straight off Deus Ex: Mankind Divided. As I have already elaborated, this game was not quite what I expected. That is not, mind you, a bad thing per se. The story left the player adrift, forced them to find their own approach, their own inspiration and motivation, which is exactly what main protagonist Adam Jensen is doing in this installation of the franchise.

Why this game?
I loved Deus Ex:Human Revolution, loved its central conflict, the world, the characters, the music, everything, really. So, of course I wanted to know where Adam Jensen’s journey was leading him.

Deus Ex:Mankind Divided is all about oppression and the hatred and suspicion it nurtures, on both sides. And while Adam Jensen, who is himself privileged in a world where people like himself, augmented people, are subjected to terror and harrassment, does not seem to care much about that oppression, I do. Which is why, in the game, I came to resent the Czech state police more than the main baddie, Viktor Marchenko, and his terrorists.

There are a ton of side quests you can do before taking on that mission, to gain Praxis, but for this playthrough I decided to go with the most basic of Augmentations, namely Glass Shield Cloaking, Icarus Strike and Typhoon.

As always, there are multiple points of infiltation, means of attack and so on. The field of operation itself is relatively small. There are a lot of people there, police officers as well as investigators. They all are hostile towards  “hanzers”, which is a derogatory term for the Augmented. Also, they expect the hanzers, or “Clanks” to try and extract the evidence they are actually witholding from Task Force 29, Adam Jensen’s unit. So, things look pretty bad.

The situation
Task Force 29 has been given jurisdiction concerning the latest terrorist act in Prague, a bombing at Ruzicka train station Adam Jensen himself got caught up in. Yet the state police is keeping the team’s forensic scientist from examining crucial evidence, which is odd, to say the least. In swoops Jensen, who is perfectly capable of sneaking into the sealed-off station and steal the evidence. He can do this either without being spotted and without hurting anyone, the stealthy, but mean way, which means remaining undetected and silently taking down enemies, or guns blazing. The only real threat in there is actually just one guard wearing exo-skeleton armor, which gives him an enhanced vantage point.

Sneaky Adam. Have patience while moving through Ruzicka Station…

The approach
In Ruzicka Station there are two points of infiltration which can be accessed in a number of  ways.

The main point of infiltration lies to the left, at the central entrance to the Station. On the left you’ll find the restrooms and, opposite, a sort of maintenance room where one will also find a key card that unlocks the security area on the right sideof the station entrance. If you are going to take on the restricted security area, be sure to have a multi-tool ready or else level five hacking capability.

So if, like me, you choose to infiltrate via the maintenance room, you’ll find yourself sneaking past two guards and up some stairs to reach the main area. Should you be strong enough, you’ll be able to sneak into a ventilation shaft and, if you’ve got advanced Icarus Dash (Game+ helps), scoot up onto a ledge from where you can proceed to either silently take out the big guard (use the breaker box to electrocute him) or sneak past thanks to Glass Shield Cloaking. 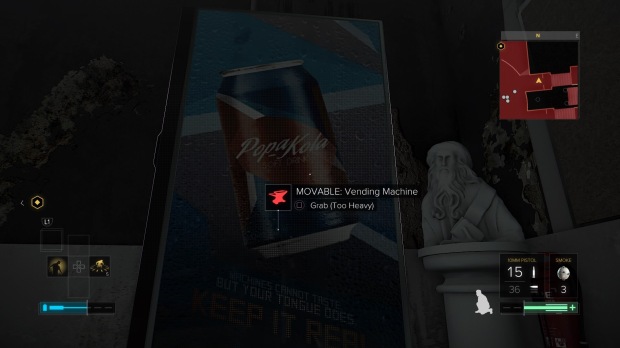 You’ll find a convenient ventilation shaft behind this vending machine right inside the station proper, but I did not have the Augs to do it.

If you are not properly equipped for all of that, you’ll have to slowly and patiently make your way right into the abandoned store to the right (watch out for the guard patrolling that area) and across, where there’s another shaft that will lead you close to your actual objective. Again, there are multiple ways to approaching this next step, depending on your Augmentations. I had to sneak past the investigators and the big guard.

Once you’ve secured the wanted evidence you can either escape via another ventilation shaft (behind you), but you better got the lungs to do it, since the shaft is filled with gas, escape via the shaft in the ceiling (requires advanced Icarus Dash) or sneak back out.

If you manage to avoid being spotted by the big guard you can get onto a sort of “elevator” (to the left of where you found the evidence) at the cost of one biocell and reach higher gound. In this playthrough all went to hell when I tried that and accidentally pushed the wrong button, which you can witness here.

In a perfect world, I would have snuck out undetected. But, this is Deus Ex  and if you screw up, you’ll have to improvise and deal with it somehow.

Which is why I love this game.

Next is Deus Ex: Human Revolution, Getting into Tai Yong Medical.