You may think this is about a Rainbow Six Siege-mission, but you could not be more wrong… So, it’s been a while since I updated this series, but in order to remedy that woeful neglect, here’s a quick recap of which games and missions were featured so far:

There are only two missing, though I will probably be continuing this series irregularly. LOL!

One is The Hawkins Seafort-mission from Splinter Cell: The Black List, the other, this one, from the very first Assassin’s Creed game: the assassination of William of Montferat. 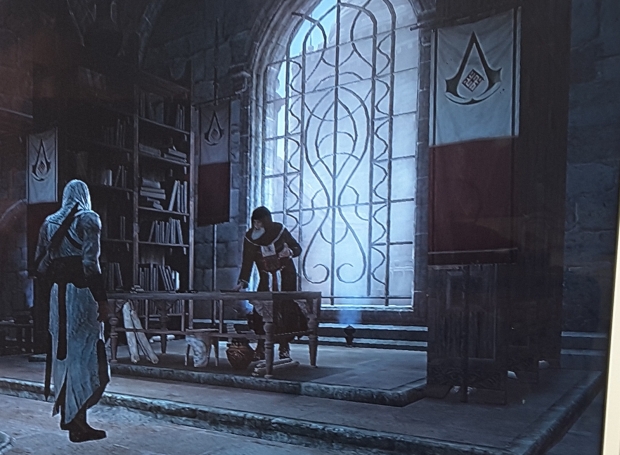 Tasked with another assassination…

Why this mission?
The mission is not so much the point, it is, actually, the target. See, we know that all of the men Altair is sent to kill are crucial to the war effort of either King Richard or Saladin.

But of all nine, William of Montferat is the only one who is actually seen interacting with Richard, who has a history with him. So Richard and William’s son Conrad do not get along, which is why Richard has basically made William a hostage in Acre, to deter Conrad and make him think twice before trying to oppose the king.

I like the setting very much, don’t ask me why, maybe it is that bluish-grey sheen that makes the city look even more depressing.

Also, Acre is one of the most intriguing locations in the game. With its poor district, its forbidding citadel and hospital and, of course, that awe-inspiring cathedral. I remember that the very first time I visited that city in the game, it took me a sweet long time finding my way up to the roof, because it is, actually, very different from climbing other structures.

That’s something else I liked. 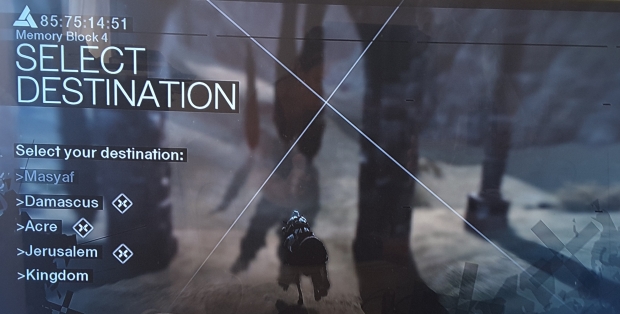 Upon leaving Masyaf on this Memory Block 4-set of mission, you can choose to either get to the target city directly or take the long way around, through the kingdom.

Also, this is the last set of missions before Altair comes face to face with his arch-nemesis Robert de Sable. Or, almost, I should say. Nevertheless, this means that he has struck here before and the guards are on high alert. There will be patrols out in force and should you draw their attention in any way, they will be on Altair in a flash. That also adds to the difficulty, which is a plus.

Eye on the prize: the citadel is where William is hanging out.

The approach
Of course, as assassinations go, this one is pretty much like all the others. First, Altair has to follow some leads, six in total. They will reveal crucial and useful information on how best to approach the situation. After all, William will be safe behind the walls of his citadel with guards all around. So best come prepared.

Two of the missions are informer missions: one a collect-all-flags-on-time-challenge, the other an assassination contract on two targets.

There are also three pickpocket-missions, and two are tricky. One is set inside a small, guarded courtyard and you will have to eliminate the guards on the walkway as well as inside the yard before you can begin in earnest. The other is very close to the route of one of the patrols mentioned above and so you have to move very carefully as to not draw attention.

Last, you get to beat up an orator who is making Richard look bad. Unfortunately, the location where you follow him to will be crawling with brutes who will want to join into the fun. I found that the best approach to end such confrontations uickly is to grab your victim and hurl him around a bit. They usually subside more quickly that way.

Armed with the knowledge you’ve gained from those investigations, Altair returns to the Assassins’ Bureau to make his report and rest. 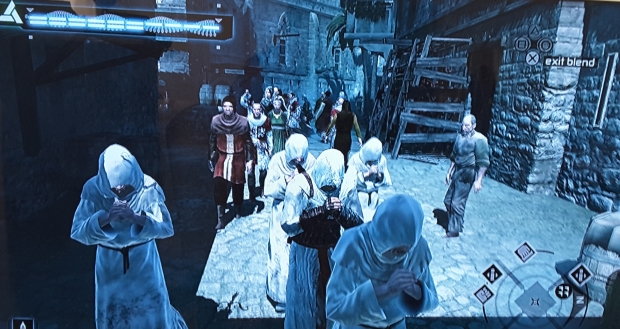 Scholars are useful when moving through the city and for getting you into guarded areas. In this mission I did not really make use of them, though.

The deed itself
I admit that I always use the same approach into the citadel. There are two, actually. One requires you to unlock the view point inside the citadel first and save a citizen in there in order to gain the cover of a group of scholars. That’s not the one I choose. I choose the structure to the left of the gate in order to get up on the ramparts. Then I take out all of the guards on the walkway – throwing knives come in handy here – and wait until William is alone once more before I silently drop down behind him and stab him with the hidden blade.

The escape then is the fun part since you still are inside a citadel crawling with soldiers, so they will soon be all over you. I usually take the same route I came in to get out.

Once Altair has successfully broken the line of sight of his pursuers and become anonymous again, comes the fun part of remaining undiscovered until you reach the Bureau.

One last look and then I am off…

Next up is my Favorite Mission Number Seven, Hawkins Seafort. Do you have any favorite missions?

Until then, keep on playing.