As mentioned in my last Favorite Mission-post, this one brings us back to the Assassin’s Creed-franchise, more specifically back to Assassin’s Creed II and beautiful Venice.

Why this game?
Italy! Venice! Ezio! Need I say more? That’s what I thought. Seriously, though, I still consider Assassin’s Creed II the best to date (Let’s face it, Assassin’s Creed IV-Black Flag was not really an Assassin’s Creed game, but an awesome pirate game). So imagine my joy when Ubisoft decided to revamp the trilogy for PS4. It turned out beautifully. If you still haven’t played this gem, I recommend you grab The Ezio Collection and do it now. It’s worth it.

Why this mission?
Well, actually, I consider assassinating the Templar Doge Marco Barbarigo dear Ezio’s final masterpiece. He’s certainly grown into his role as assassin since setting out to avenge his father and brothers, but with this achievement he comes full circle.

To fully understand this, let’s take a look back at Ezio’s very first assassination in Florence. His victim was the traitor Uberto Alberti, Gonfaloniere di Giustizia. That traitorous Templar sentenced the male kin of the Auditore family to death on behalf of soon-to-be Pope Alexander Rodrigo Borgia.  Alas, Ezio managed to elude his captors. Now a wanted man, he found refuge in the brothel of Paola, a fellow assassin, although at that time Ezio was unaware of her allegiance. Paola taught him the basics he would need to be able to get close to Alberti and kill him.

Ezio’s target in Venice is Marco Barbarigo, newly elected Doge of Venice and a Templar to boot.

In Venice, after being falsely accused of killing the previous Doge, when in truth he tried to save him, Ezio needs another ally to help him out. Again he is a wanted man and again a madam, this time one Sister Teodora, advises him on how to approach the task at hand, which is to kill Marco Barbarigo, the man the Templars have installed as new Doge.

It’s really easy
Now, while killing Uberto Alberti merely required learning how to move through the city unseen and having Leonardo da Vinci repair Ezio’s assassin blade, this one’s more tricky.  But, actually, quite easy compared to other missions featured in this series. 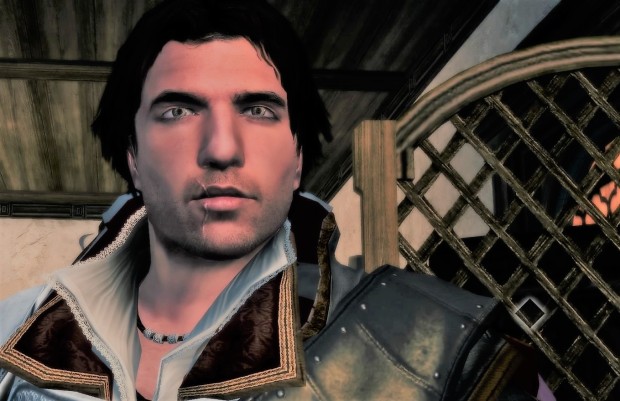 Ezio seems to be a bit sceptical about this mission, but, really, this is a Ubisoft-game, so you will always be told exactly what you have to do and not to do to accomplish the chosen feat.

Turns out that it is carnival season in Venice and the Doge will leave his palace to host a ball of his own. Aware of Ezio being on the prowl, though, he’s decided to attend the feast from the safety of a barge, which is heavily guarded. Meaning, that our dear assassin will be hard-pressed getting close for the kill. But we all know that Ezio is always being awarded a new weapon before taking on another main mission, don’t we? This time, a Codex page yields the design for a small pistol, which Ezio promptly gets to try out on a murderous brothel client.

Now, back to the task at hand. The Doge’s feast is being held in a small, confined area on the water front of the Dorsoduro district. Since only invited guests wearing numbered golden masks are welcome, Ezio needs to procure one for himself. Luckily for him there is a public competition underway in the district. Whoever wins all four games will be awarded a golden mask and thus an invitation to the Doge’s ball.

Let the games begin
Winning the games is really a piece of cake. First, Ezio needs to steal ribbons from groups of ladies walking the district. As charming as he is, that’s not really a challenge. 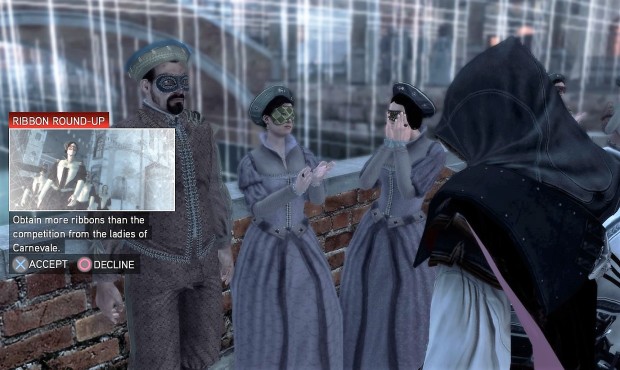 Charming the ladies of the district into handing over their ribbons is right up Ezio’s alley.

Then he has to compete in a race against the clock across the rooftops. But, hey, this is Ezio Auditore da Firenze! So, no real challenge either. The next game is CTF, yes, exactly, Capture the Flag. And this one requires a little more finesse. Since Ezio has to compete against an actual NPC, timing is key. Ezio’s starting position is high on the rooftops, and don’t bother looking for a haystack here, there’s none. So you either climb down real quick – which is a bad idea, since you’ll lose precious time – , or you jump into the abyss and drain a medicine bottle even while you race to capture the flag and bring it back to your base. Do this three times and you’re done. Be sure you’ve packed enough medicine.

Silvio Barbarigo and Dante Moro, both standing to the right, view Ezio’s progress with growing distrust.

Now, Ezio’s progress does not go unnoticed. The sinister Templar Inquisitor Silvio Barbarigo and his henchman Dante Moro keep a close eye on him. And they don’t like what they see. Which is why they decide to intervene during the last game, a boxing competition.

Actually, there are no weapons allowed in this game called “Cheaters never prosper”. But, unfortunately, thanks to Templar intervention, they do prosper,  despite Ezio being the true victor of all four games.

Ezio disposes of the first few competitors easily. Then Dante Moro enters the ring himself. And although he is tougher than the others, he’s no match for our Florentine nobleman-turned Assassin. 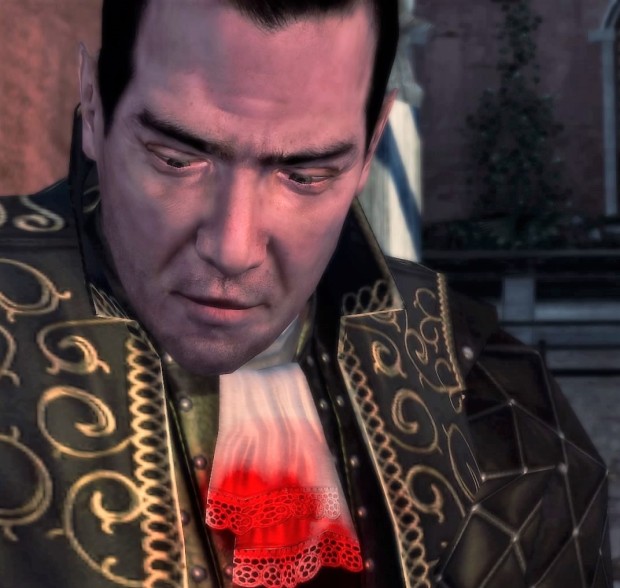 Nice try, Dante. You’ve got blood on your shirt, in case you didn’t notice.

Silvio then decides to cheat and bribes the Master of the Games. Four guards enter the arena and, against all rules, they are armed with knives. Now, Ezio is pretty good with a dagger, which they maybe failed to realise, but even though our favorite Assassin emerges victorious in the end, the Master of the Games awards the mask to Dante Moro.

What to do?
Back at Teodora’s brothel Ezio openly contemplates killing Dante to get at the mask, but the head of the local thief guild, Antonio, advises against it. Better to steal it then beat Dante to where the ball takes place and kill the Doge. Which, if you think it through, is a really terrible plan.

Antonio is a nice guy, I’m sure, but his plans are really terrible.

Because, of course Dante realises that his mask is missing the moment he wants to put it on before entering the ball. So, while Dante and a load of guards search the confines of the event location, Ezio has to keep ahead of them, move around several groups of guests and courtesans and hide in plain sight, until, at last, the opportunity to kill the Doge presents itself. 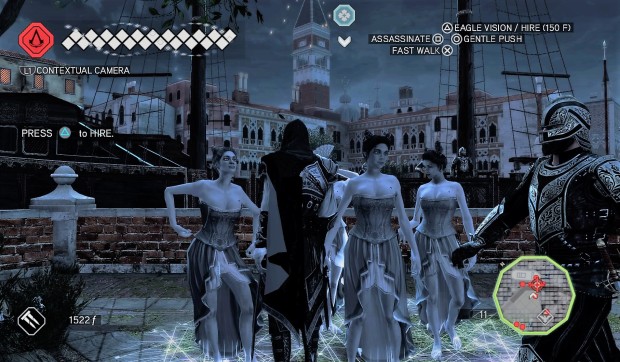 Ezio made it to the party, but he is now a wanted man and the guards are feverishly searching for him among the guests. Hiding among courtesans or other groups of people is therefore a must.

As mentioned, the Doge is attending the feast from the safety of his barge, so Ezio has to shoot him with the tiny pistol. Fireworks cover the report of the shot and therefore make this a stealth kill. Well, almost. In fact, I’ve never managed to steal away from the crime scene unnoticed. And I’ve played this game lots of times…

In the moment of his death, poor Marco Barbarigo is faced with this really scary golden mask, worn by Ezio Auditore.

Afterwards, Ezio returns to Sister Teodora’s brothel to, well, claim his reward, but, alas, the angelic Madam, who he has clearly and truly fallen for, leaves him with four of her girls to lend comfort in her stead, much to Ezio’s disappointment. I loved that one. And, oh, Teodora is an Assassin too, in case you didn’t guess already. 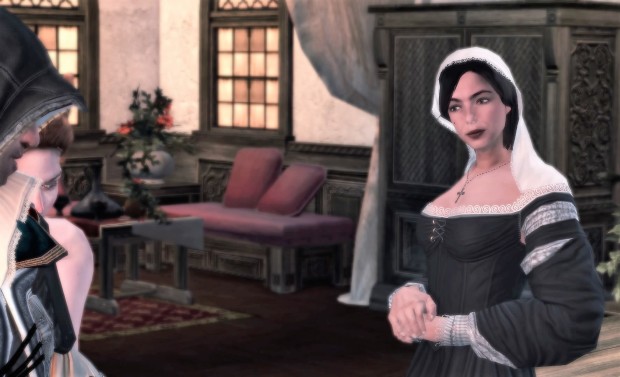 Sister Teodora is in charge. Always.

Fun fact
As mentioned, I’ve played this one more than once. One time, though, I got into a fight with the guards right after I had stolen the mask and Dante realised it was missing before I even got close enough to shoot the Doge. I ultimately had to abandon the mission and try again. So much for easy!

Up next is my favorite mission in Thief, which is called “A Friend in Need”.