The journey of the Gravewalker, aka the undead half human, half elf creature that were once Talion the Ranger and Celebrimbor the Ringmaker continues. While Act I served as Prologue of the game, in its second Act Middle-Earth: Shadow of War returns to the old fun and games that is forging an army out of enemies by dominating them through the power of the One Ring, or, in this case, the New Ring. Yes, that’s right, at the end of Act I the Gravewalker gets his ring back from Shelob as thanks for saving her from her foes. Or rather, Talion gets the ring back, since she doesn’t trust Celebrimbor.

The city the Gondorians tried to defend with Talion’s help and Celebrimbor’s unwilling assistance has eventually fallen to the Witch King of Angmar, though, and will henceforth be known as Minas Morgul. Sounds familiar? It looks the part too. Unfortunately that means the Nazgul have also taken possession of a palantir that will give their forces an advantage over the opposition, as Celebrimbor claims, to stress the importance of regaining that artefact. What they need to do now, he also says, is forge an army and conquer Mordor. So far, so familiar.

The rules of conquest
Now, the dev’s had a very clever and very funny idea for a tutorial for that, by introducing one of the Gravewalker’s first recruits, Brúz the Chopper. This guy, once he’s been made the Gravewalker’s bodyguard – yes, you can now enlist bodyguards from your troops – will pop up during some of the missions and advise the Gravewalker on how things are done in Mordor. If you’ve played the first game you already know the rules, but Bruz is charming and funny as hell, so you won’t be bored or annoyed by his lecturing.

Know your enemy: While a captain’s or war chief’s strengths will be known to you, you’ll have to find intel to uncover their weaknesses to have a better chance at defeating them.

The rules are these: There are four forts in Mordor and each is ruled by an Overlord. This overlord commands two to five war chiefs whose outposts bolster the fort’s defenses. Under their command are the captains, who lead the regular troops. Some of them also serve as bodyguards for the war chiefs and if recruited, they will betray their master. To get a chance at conquering a fort by taking crucial points inside the fortress then confronting the overlord to either kill, shame or recruit him, the Gravewalker has to kill or recruit the captains and war chiefs first. 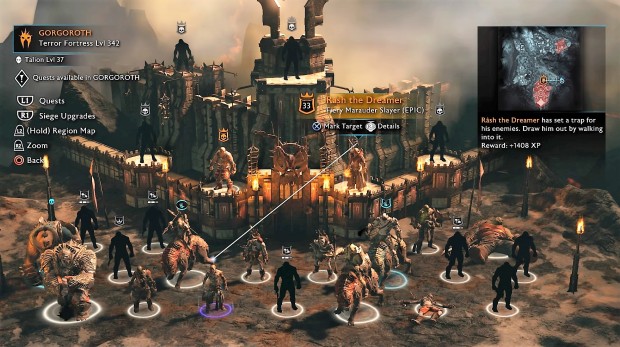 This is the region’s usual friend-foe setup with the fort in the background. You see that I have highlighted the bodyguard (purple means epic, btw) of Rash the Dreamer, who was one of my nemesis, meaning he had defeated me a couple of times and I was eager to defeat and recruit him.

Join the Bright Lord
Everywhere in Mordor is enemy territory and the enemies, from regular grunts to captains and war chiefs, are awarded XP, promotions or a new title whenever they manage to send the Gravewalker back to, well, the grave. The Gravewalker, once more risen from the dead, will then be able to take his revenge and kill or dominate and recruit his executioners in turn, gaining extra XP. What is new is that he is also able to shame high level enemies if he is unable to recruit them. Some of the enemies, this is also new (at least I believe it is, can’t remember if that already was in the previous game), won’t be recruited due to their Iron Will and those he has to fight to the death or, as mentioned, shame. 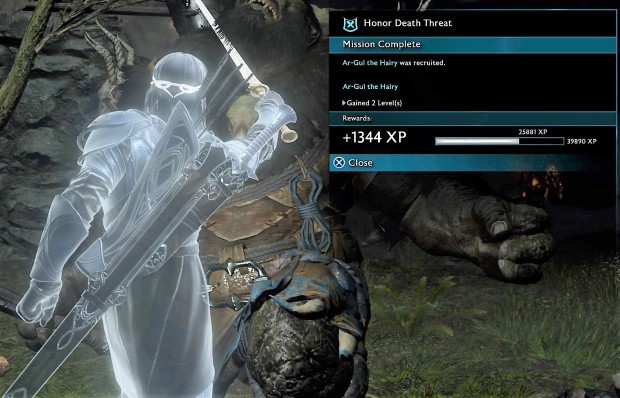 If there’s one enemy you dislike in particular, you can issue a death threat and then kill or dominate/recruit him for extra XP.

There are different enemy tribes, like the Dark Tribe, Mystic Tribe, Terror Tribe or Machine Tribe and they also feud among each other. This the Gravewalker can exploit by observing duels between captains and either waiting until one combatant emerges victorious and then hunt him down or by interfering in the fight and helping one defeat the other. He can also send his followers to the fighting pits to let them square off against enemies and gain XP, if they survive. If they don’t, he can always go and recruit the enemy survivor. Remember: the stronger your followers, the better, so better help them gain XP by doing follower missions. 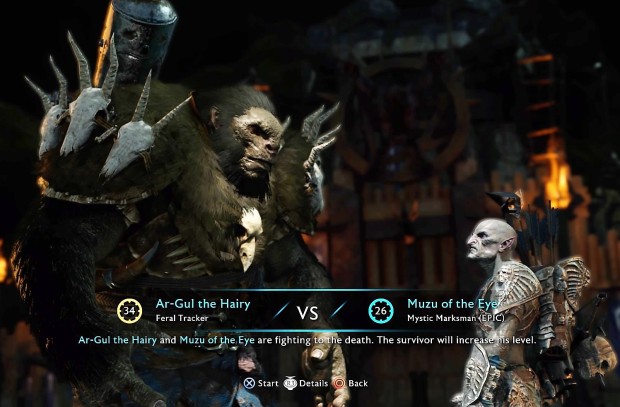 Usually, you’ll set followers against enemies in pit fights, but having one follower kill another in one of those duels is actually an achievement… This one, though, was not a fair fight.

The easiest strategy to defeat a war chief, I have found, is to dominate his bodyguards, if he has any, and then assist them during a mission aptly called Betrayal. They will help you wear down the war chief’s defenses and make it easier to bring him down. As mentioned, knowledge of the enemy’s weaknesses is key, so gather intel first, by either interrogating so-called worms or finding documents. Remember, taking down the war chiefs will result in disabling the fort’s defenses, so do that before taking on the fort itself.

The Gravewalker, looking determined and strangely leonine as he leads his troops to lay siege to an enemy fort.

When ready for the assault, you first have to choose assault leaders from your troops – ususally those with the highest levels – and then equip them with special siege updates like Mounted Archers, a War Graug or Siege Beasts. Before you do that, try to gain intel on what kind of tribe the fort belongs to and what strengths the overlord comes with to adapt your siege forces accordingly. For example, some forts have reinforced walls, so Ologs able to break them down won’t be as effective as sappers who concentrate on breaching the gate with explosives.

Once you are ready, prepare to lose some of your followers and charge.

Lording it over the enemy
Simply put, Talion is the muscle and Celebrimbor the brains of the Gravewalker and if you watch closely, you’ll know who dominates who in that pairing. Nevertheless, it is Talion who is the game’s true hero, and he is a pretty humble guy, so it is always jarring to see Celebrimbor lording it all over his troops. Don’t get me wrong, Celebrimbor is truly epic in combat. But his attitude still puts me off.

Now, how to defeat an overlord?

Usually, they are vulnerable to ranged attacks and stealth, which means Shadow Kill will work on all of them. Unfortunately, the Gravewalker has to face them pretty much on his own in their very own throne room. You can summon followers, but I find it easier taking on the overlord and his minions by myself and dominating those grunts I can reach to turn them against their comrades. The overlords are always huge and the minions are plenty and of various classes, so you need to dodge and run a lot. Good to know: every throne room has smallish balconies above the doors, where archers are hiding and where you can also retreat to, if the going gets too tough, and recover. 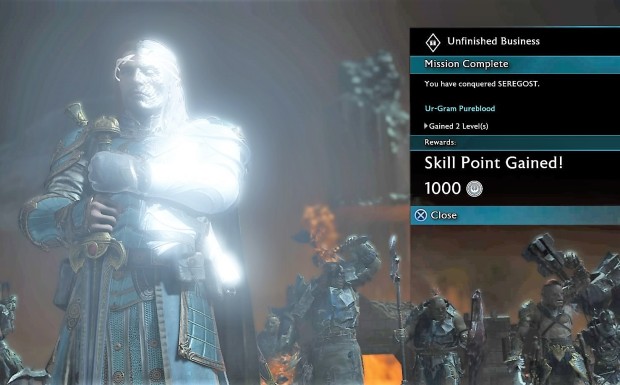 Ah, sweet victory! The overlord’s defeated – finally! – , and the fort is ours.

Use the minions to charge up Might and Focus, then strike the overlord with excution and Elven Light, which you should upgrade so it freezes enemies around you. All of the overlords I faced could be temporarily disabled that way. Before I realised that, the very first overlord I took on, one Ur-Gram Pureblood, defeated me five times in a row, since he had the ability to heal over time (a trait of the Mystic Tribe) so I would have to start basically from scratch wearing down his health each time I returned to fighting him after having taken down his archers and replenished my own health.

You win some, you lose some. This overlord was six levels above mine and one tough son of a b*tch to beat.

The second was way above my level, but, – after he’d killed me once or twice, and that was an experience I learned a lot from – pretty easily defeated using Shadow Kill. I leveled him down to defeat him, later turned him into my bodyguard before he, well, betrayed me. That happens a lot, by the way, that betrayal thing, and you mostly don’t see it coming. Which is great.

Once a fort is taken, you can choose a new overlord from among your followers and you should keep in mind that the enemy will attack your fort sometime, so the overlord and his war chiefs should be strong enough to defend it.

That said, let’s get on to the missions.

The very first fort you take should see Brúz as its new overlord by rights and the fact that the game does not allow you to do that is an ill omen. So, yes, Brúz will stab you in the back, literally. Getting your revenge on him is one of the more entertaining mission arcs, thanks to a familiar face, namely that of Ratbag (Ratbag was the first orc Talion recruited and helped become war chief in Shadow of War).

Of course, another mission set has Talion catching up with his fellow Gondorians and aiding them in their escape after the fall of Minas Ithil, now Minas Morgul.

Another epic mission arc is set by Carnán, the spirit of nature, who warns that a Necromancer is trying to free a Balrog she previously imprisoned in the earth. Your task will then be to hunt down the Balrog and those who called it forth. 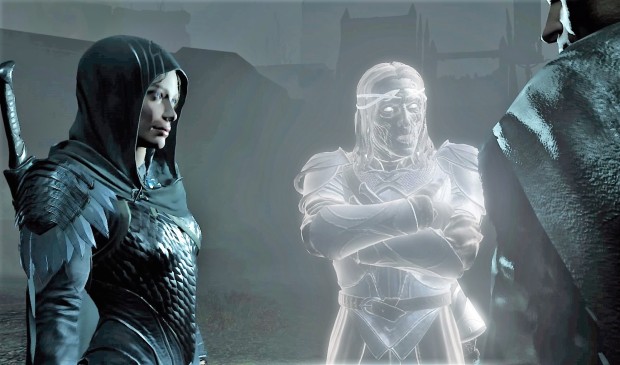 The elven assassin met in Act I joins the Gravewalker in his fight against the Nazgul and Celebrimbor tellingly sides with her every time she tries to dispel Talion’s doubts about ending the ring wraiths.

The last and very grim mission arc is the fight against the Nazgul, who still want to turn Talion into a ring wraith. Fighting the Nazgul is tricky, you always have to watch out for the counter prompt and react in time, or they will wear you down quickly. You’ll face a number of Nazgul in Act II and especially the fight against Isildur is hard. And its conclusion… Well, let’s just say that, after having sat through the middle of Act III with my mouth hanging open, I now officially hate Celebrimbor.

More on that and on how to bring down the Witch King and Sauron in the next post, since now its time to head back into the Shadow and continue my quest…