Be warned, there will be HUGE SPOILERS! Don’t read this post unless you want to spoil yourself and/or if you need tips on how to effectively fight the Witch King of Angmar and Sauron.

Look at this beautiful image of Barad-Ur while you think about whether you really want to read on and spoil yourself.

So, from the very start of the game I expected Celebrimbor to betray Talion at some point. But, how could he do that? One cannot exist without the other, right? Now, during the four mission arcs you have to complete in Act II to progress the story the elf makes it very clear where his priorities are: there is no cost too great to defeat Sauron.

Talion is having more and more problems with that attitude. And while he is still ignorant of the magnitude of Celebrimbor’s betrayal (after all, he initiated the blood ritual that cost Talion and his family their lives in order to possess him), when he finally defeats the latest Nazgul in battle he is granted a vision that seemingly makes it very clear Celebrimbor was aware of the ring wraiths’ creation. He accuses the elf, who reasons that he had no idea and was deceived himself, since the rings were supposed to bring order.

Eltariel, the elven assassin sent by Galadriel – Galadriel is Celebrimbor’s aunt and not too fond of him, by the way – to hunt down the Nazgul, agrees with him concerning the price they might have to pay to bring the Dark Lord down. 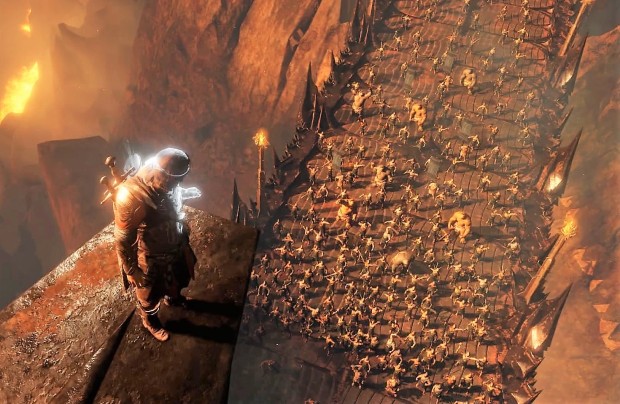 The Gravewalker addresses his troops before they storm the bridge to Barad-Ur.

So, after having successfully conquered all four forts in all four regions – minus Minas Morgul – the Gravewalker’s army sets out to challenge Sauron in his tower. On the way across the bridge the Gravewalker has to fight hordes of enemies and the captains he has not yet subjugated alongside Eltariel as well as his own troops and followers. Unfortunately, a Nazgul joins the fray, which is very nasty indeed. See, the wraith hides in the thick of battle and strikes quite unexpectedly. Catching the counter prompt on time is difficult, very difficult, and I died a few times before I finally defeated the wraith. Dominating the enemy captains and having them fight by your side helps, by the way.

Once they reach the tower, Celebrimbor finally reveals his true goal, which is to subjugate Sauron instead of destroying him. While Talion protests that this is not what he signed up for – as if he had a choice – Eltariel agrees with the Ringmaker.

Seizing his chance, Celebrimbor abandons Talion, who, he states, was only a vessel in this endeavor anyway, and offers the New Ring to Eltariel. The elf, shockingly, only briefly hesitates before accepting it. Which leaves Talion bleeding out on the bridge, succumbing to the mortal wound he once received in that cursed blood ritual. While I expected the betrayal, it still left me slack-jawed and that was mostly thanks to the (always) excellent voice-acting of Troy Baker as Talion. 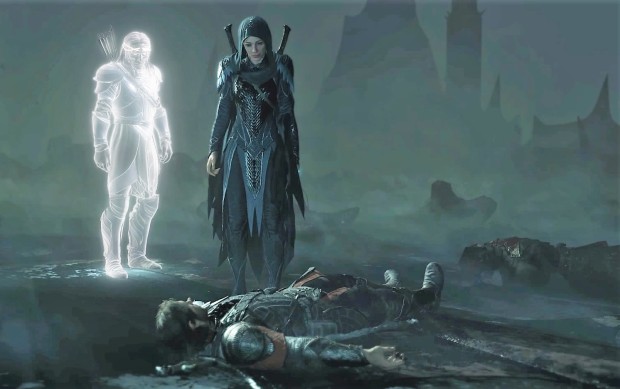 Betrayed after all. Poor Talion is dying for real this time.

Cue a vision of Shelob, who finally reveals what it is she saw in the future: When Celebrimbor reaches him, Sauron will fall and the Bright Lord will not only conquer Mordor, but all of Middle-Earth. But only, if Talion is by his side. Which he is not, so Sauron will – probably – win and thus Middle-Earth is still in peril. Only, Talion is dying on that bridge, so, what can he do? Yes, what indeed. He takes the Ring of Power the Nazgul has lost after their battle and puts it on. 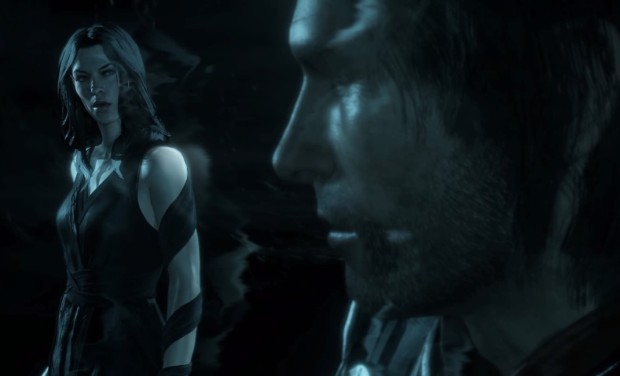 The Great Spider’s advice? Make a sacrifice to save Middle-Earth.

Exactly. Talion turns himself into a ring wraith voluntarily, and I can already guess he’ll have to face Eltariel the Nazgul-hunter someday soon. As for Celebrimbor, he gets what he deserves and what has been a long time coming.

Confronting the Witch King of Angmar
Thanks to being a ring wraith Talion retains all of his wraith powers yet instead of Celebrimbor’s spectral white form we see a greenish wraith of Talion whenever he employes those powers.

Talion is now a ring wraith and he really looks the part. Also, he’s out for his revenge on the Witch King of Angmar.

To guard against the forces of Mordor, he needs a fortress and Minas Morgul will do nicely. So he goes there, slaughters its defenders while raising the dead to aid him and, finally, invades the Witch King’s hall and challenges him to a fight.

The Witch King is very fast and dodging and watching out for counter prompts is key. But the secret to winning this fight is shoulder-charging into the Nazgul to throw him off balance and then attack as fast as you can. Once broken, you can banish him and you’re done.

Finally, the palantir is safe. Hopefully.

Minas Morgul the Undead Stronghold is now yours and we switch to the battle between Celebrimbor, Eltariel and Sauron.

Confronting Sauron
As in The Bright Lord and the flashbacks in Shadow of War he fights with sword and bow and employs that awesome power that has him not dodging aside but teleporting through Sauron’s form to land behind him and attack from there. Sauron is vulnerable to ranged attacks, but when his hits land you will lose lots of health. Which is odd, since Celebrimbor is a wraith.

Not sure what difficulty I am playing on, yet defeating Sauron as Celebrimbor felt surprisingly easy. But then, this is not the end game, is it.

Celebrimbor does bring Sauron to his knees in the end and I briefly feared Shelob was wrong after all, but then Sauron does what Isildur did to him and in a last ditch effort cuts off Celebrimbor’s finger and with it the New Ring. Which is odd, because Celebrimbor is a wraith and Eltariel is actually wearing the ring. And yes, it is Eltariel who bleeds and Celebrimbor who is joined with the Dark Lord.

What an epic ending! And the game isn’t over yet… So I wonder, what will come next?

I thought Act III was really, really intense, story-wise, and I love what they have done with the characters. Love it, love it, love it. So, on to Act lV.

I am very curious how all of this will end.