Welcome to the second part of Whatchaa.com’s best and worst of 2017 series! Now, I don’t think that a game necessarily needs a powerful nemesis for it to be a good game (The Last of Us comes to mind). But if there is a nemesis (and let’s face it, in most cases there is that one person or organization you are supposed to dislike en lieu of the protagonist), please, let it be a good one. The same goes for the heroes, naturally.

What are my criteria? Well, a nemesis needs to be mean, right? And the more personal, the better. Also, I like surprises. And, of course, games frequently try to trick you into thinking that someone is the bad guy when that person is, in fact, not the nemesis at all. Or else the person you think is a good guy turns out to be evil.

Ah, but what is evil? For there are also those villains who have a pretty good reason for their descent into villainy. Right?

As for the heroes, I need to be emotionally involved in their story for them to be a “good” hero. If I don’t share their ideals, don’t suffer with them, what’s the point, really? Despite that, I am a sucker for ambiguous heroes, those who are not entirely untarnished by whatever tragedy they experienced. Of course, sometimes games leave that latter part to your imagination, or, rather to your own moral compass. So there are some heroes I played that had a compelling storyline but whom I still disliked for their attitude.

Spoiler warning
So, of course, I need to warn you. There are spoilers ahead for the following games: SNIPER ELITE III and SNIPER ELITE 4, Middle-earth: Shadow of War, Aragami, Dishonored 2, Wolfenstein – The New Order, Wolfenstein II – The New Collossus, Thief, Assassin’s Creed- The Ezio Collection and The Last Guardian.

Top 5 Villains
5. General Böhm, SNIPER ELITE 4
SNIPER ELITE III’s villain, General Vahlen, is an elusive target, granted, and hero Karl Fairburne spends the entire game tracking him down until he finally confronts and kills him at the end of the last mission. Classic setup, right? General Böhm, the main antagonist of SNIPER ELITE 4, is like a fairy-tale monster used to scare the enemy soldiers. He is a bad, bad man, no doubt about that. Luckily, the OSS has managed to enlist his second, one Major Dorfmann, as willing spy and collaborator. I clearly remember that one mission where Karl meets Dorfmann in person and the latter jests that by shooting the commando he would certainly gain fame as a war hero. I did not suspect Dorfmann then, though I certainly disliked him instantly, but reading the collectible letters and missives in the Giovi Fiore mission made it very clear that Dorfmann was, actually, General Böhm himself. And while he will go down as the stupidest villain in history for trying to talk Fairburne to death instead of outright killing him, that was still a surprising turn of events in this game.

4. Celebrimbor, Middle-earth: Shadow of War
Middle-earth: Shadow of Mordor introduced Talion the Ranger as the perfect hero, and, let’s face it, the exact copy of Aragorn of the The Lord of the Rings-saga. Thankfully, he was paired up with the insufferably arrogant and inhuman elven wraith of Celebrimbor, an ancient soul obsessed with ruling all of Middle-earth. His cold, aloof demeanor and that gravelly voice are enough to dislike him instantly. Yet in the The Bright Lord-DLC it becomes clear that he was responsible for Talion’s death, and that of his family. Kudos to the studio for making Celebrimbor the central villain in Middle-earth: Shadow of War, and kudos to Alastair Duncan for his stellar performance. I seldomnly come to hate fictional characters, but oh, how I screamed and raged when Celebrimbor finally betrayed Talion and left him to die! Perfect.

3. The Shadow Empress, Aragami
In a war, what is good, and what is evil? One people’s triumph is the other one’s misery and suffering and revenge know no colors. The Aragami, the ghost of vengeance invoked by Yamiko to help free her and avenge her people at first knows only her perspective. But as the game progresses, it begins to doubt that freeing the Shadow Empress along with Yamiko will end the suffering the war has brought to the land. The game is, I should mention, not entirely subtle when it comes to the Shadow Empress’s identity. Roughly halfway through you will certainly be aware of the possibility that Yamiko is not what she seems. Yet as you experience her memories, relive her losses, her rage and her anguish, you will be quite content with the choice our hero makes in the end.

2. Delilah Copperspoon, Dishonored 2
Dishonored features a rather dysfuncional royal family, with an empress who does not dare marry her lover, the father of her only daughter and heir, and a sweet little girl that knows, in her heart, that her mother’s spy-master and bodyguard is more than he seems. Delilah, the game’s main anatagonist, fits right into that family. Is she, or is she not, the illegitimate daughter of Empress Jessamine’s father and therefore Emily’s aunt? If you’ve played the two DLCs of Dishonored, The Knife of Dunwall and The Brigmore Witches, you already know she has set her sights on the throne of the empire. But despite Jessamine’s confession and despite experiencing Delilah’s very own memories, do you believe her? I know I didn’t.

1. General Irene Engel, Wolfenstein II- The New Collossus
As mentioned before, it takes a lot for me to come to truly hate a fictional character. General Irene Engel was first introduced to me as one of the bosses in Wolfenstein- The New Order and she certainly made more of an impression than the actual boss I had to face during the final confrontation. She returns as the main villain in Wolfenstein II – The New Collossus and, boy, does she deliver! Cruel, arrogant and manipulative are the words that come to mind. And, despite all my heroic efforts, she won round after round after round. Because of her, I suffered. I despaired. Revenge, my friends, was sweet, let me tell you that! 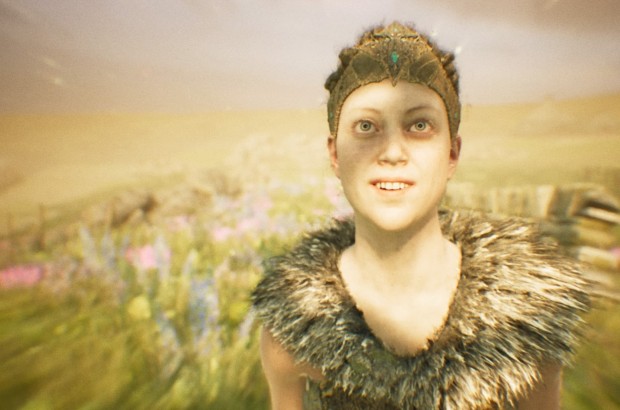 Senua, heroine of Hellblade: Senua’s Sacrifice is a complex and compelling character.

5. The Boy, The Last Guardian
Imagine yourself, a little boy of maybe nine years of age, abandoned in an unfamiliar place, a cave, actually, alongside a huge, scary monster. Imagine yourself finding the courage to free and heal the wounded and chained creature out of sheer compassion. Imagine yourself trusting that new companion, caring for it as it would care for you. You’ll have to come to know its strengths and weaknesses, its limitations as well as your own, to beat this game. Yet there were some times when I simply felt like giving up because the emotional burden became too much. There is one scene in particular, right at the end of the game, when other Trico attack your guardian and you need to find a way to help it while witnessing them clawing and biting at its unresisting, beaten form. I found that hard to bear, yet the ending was even harder to stomach…

4. Garrett, Thief
Now, I haven’t played the old Thief-franchise. But I like stealth games, so I decided to play the reboot, one of he first games I played on the PS4, actually. The game’s protagonist – I hesitate to call him hero – is a master thief, focused on achieving the perfect heist. Stealing is all he knows, and he is very good at it. He usually ends up stealing from those who apparently deserve it, but he is no Robin Hood either. The money he gains, after all, goes into improving his equipment and arsenal. Also, Garrett is no warrior. He needs to play it safe and keep to the shadows. For he is a wanted man and guards will attack him instantly, if discovered. Over the course of the game, though, his guilt and conscience overcome his greed and in the end he turns into the savior of a protegé he actually resents, in order to save the City and its people. There is far more to his story as told by the previous games, though, and knowing at least a little bit of the lore helps understand his motives and behavior (never drink from a cup or goblet offered to you!) better.

2. William B.J. Blazkovicz, Wolfenstein – The New Collossus
My foray into the Wolfenstein-franchise was a surprisingly emotional one. Playing this first-person shooter as William B.J. Blaszkovic I came to understand, though, that, the better the story, the better the game, even if it is a genre I usually despise. I am, I admit, more of a pacifist. I do not like guns at all. But B.J.’s story is intriguing and its emotional impact not to be underestimated. That one time he went on an LSD-trip in Berlin? Awesome! The battle against the intimidating Eye of London? Scary! And the ending … Well. Wolfenstein- The New Collossus is somthing else entirely. B.J. takes the fight back to the U.S., recruiting even more resistance fighters while coping with his role as father-to-be and his partner wanting to share the adventure. This fight is just so much more personal. I admit I cried several times and found myself rooting for B.J. the entire way.

1. Senua, Hellblade – Senua’s Sacrifice
Hellblade – Senua’s Sacrifice was a game I had been looking forward to very much. I did not know what to expect back then. For what I got, in the end, was one of the best game experiences ever. Senua, the game’s protagonist, is a tough heroine as well as a broken soul. She is an awesome warrior and at the same time incredibly fragile and vulnerable. Suffering from a severe psychosis she proves herself an indomitable spirit hell-bent on saving her dead lover’s soul from the clutches of Hella, a half-godess presiding over the world of the dead. Melina Juergens, as Senua, brings to life a complexity of character that is hard to describe. She is the hero of the game as well as the villain, as her mental condition is, actaully, the all-consuming darkness she has to defeat to complete her quest in the end.

Do you have a hero or villain you think should be on this list? Let me know in the comments!