Welcome to 2018, guys! Here’s to it becoming a wonderful and successful year for every one of us!

Now, while downloading Life is Strange and nursing my hangover, I decided to write that review of Eagle Flight VR I promised in the previous post. Admittedly, this is not a complete review, since I have yet to finish the game (I cannot play longer than 10 minutes, since else I’ll suffer badly from motion sickness after I remove the headset) and I just want to give you an idea of what it feels like to fly through beautiful Paris in the guise of what I believe to be a bald eagle. I am no zoologist… 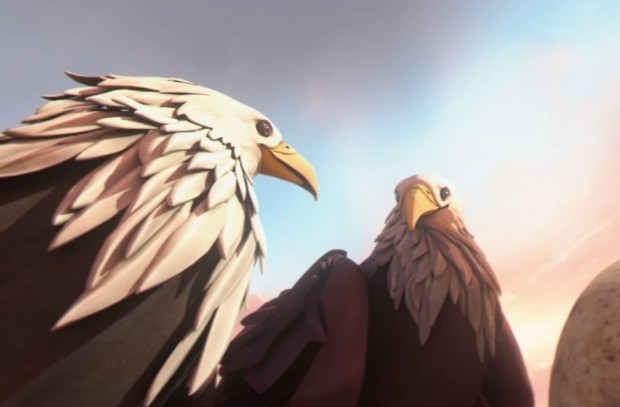 Meet the proud parents of our eagle hero.

The story
Apart from being able to freely explore the city districts and compete in online challenges against fellow gamers, you can also complete the story, which is, quite simply, called A Bird’s Life. And this is where you actually start your journey: With the bald eagle hatching from the egg and catching a first glimpse at its parents, its sibling and the city of Paris. 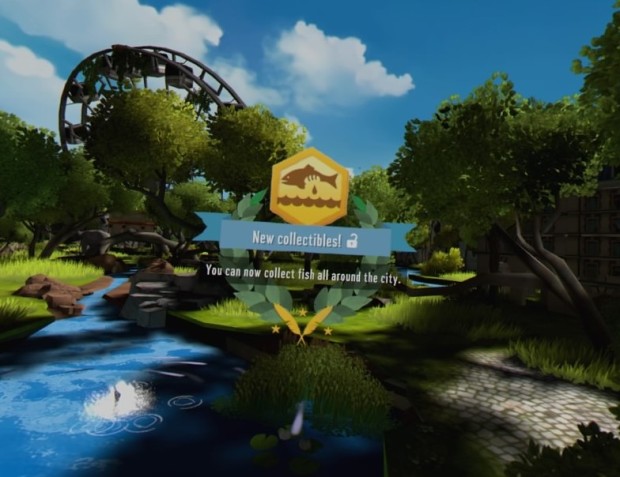 Catching fish is fun. When you see them jump out of the water you need to speed up and grab them.

For unexplained reasons, the French capital has been abandoned by its human inhabitants and over time nature has reclaimed the buildings and infrastructure, where now both native animals and exotic ones – escapees from the zoo – dwell side by side. 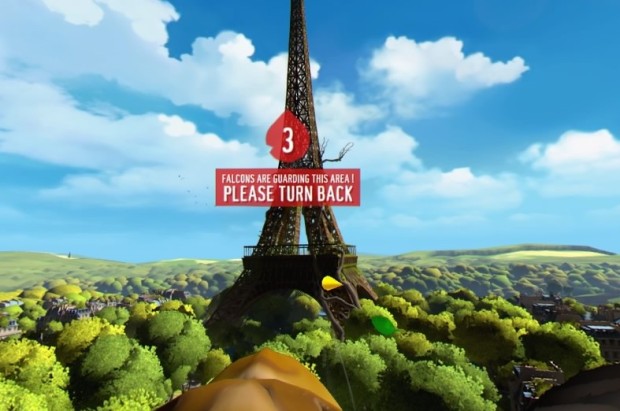 I have yet to encounter a falcon, but am pretty sure that will be the end boss, somehow.

Finding a nest, charming a mate and defending their home from enemies like crows, bats and vultures is all part of A Bird’s Life. Also, exploration, as the eagle has to find sustenance in the form of fish caught in the river Seine and the many canals found in the city, and it also has to collect feathers for the nest, which requires some tricky flying. While exploring, the bird will also have to complete races and once finished, will be able to compete in them against other players. 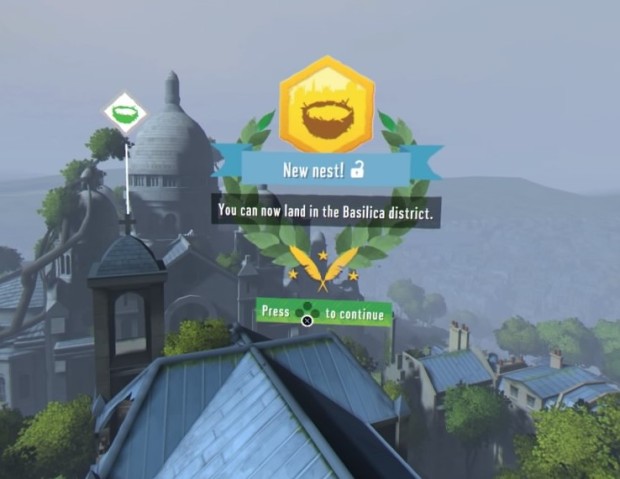 By completing the missions you unlock new districts and build a new nest there. Each new district will be a little more difficult than the previous one. 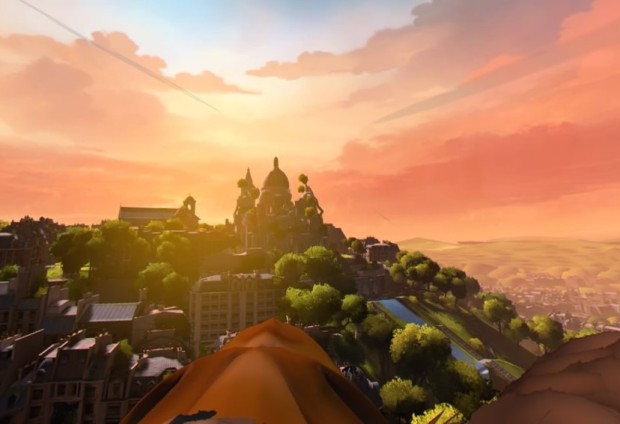 This city is so beautiful when viewed from above! But you really have to explore between the buildings too! Try and find the overgrown street leading up to the Basilica. It looks fantastic.

The gameplay
Flying, or steering, the eagle is not as simple as I thought in the beginning. Wearing the VR headset, instead of turning your head, which seems the natural choice, you need to tilt it to the left and right in order to make turns. The more you tilt, the tighter the circle you’ll fly. You can also use the controller to slow your bird’s flight, allowing you to manage tighter corners, which is a must when flying on street level between the buildings or when hunting intruders/enemies. And if you can slow down, naturally you can also speed up your bird. Diving from the sky towards the river at speed feels fantastic, by the way. 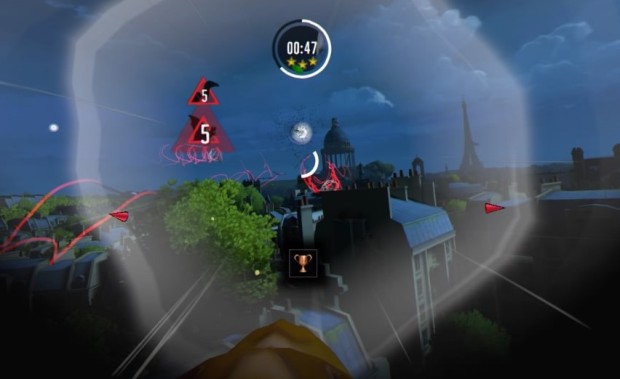 You can see how many enemies are left, in this case five vultures and five bats, that have to be eliminated before they reach the District’s border.

Your bird will frequently come up against enemies in the shape of other birds, like crows and vultures, but also encounter bats the size of turkeys. To defeat those enemies the eagle can hurl a screech at them, which, if it hits an enemy, will kill it, and, if it hits that enemy’s defences (the crows weave deadly windtraps they place in your way while the bats can shield themselves briefly against your screech), that defense will be torn apart. 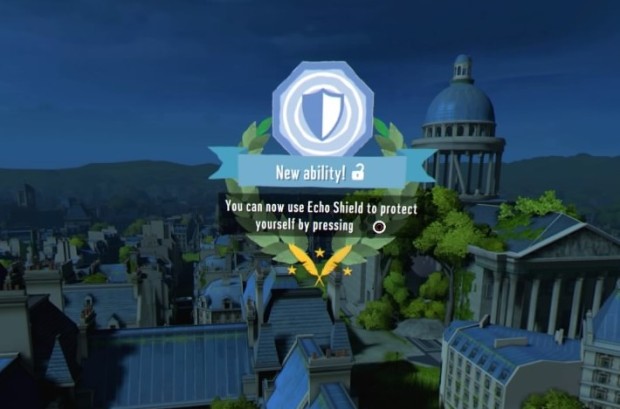 Though the eagle’s screech is powerful, you need to beware, as bats can also emit damaging and, ultimtely, deadly screeches. Luckily, the eagle can shield itself against those as well.

During exploration, the challenges the eagle encounters will include navigating structures like underground tunnels or flying across a district on a predestined course as fast as possible and therefore with as much precision as possible. The underground tunnels will feature tight corners and many, many obstacles, while the district courses challenge you to fly straight through the middle of the rings marking them to get a perfect score. 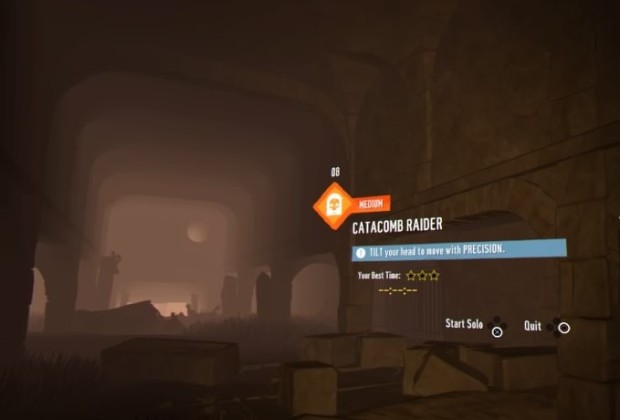 Navigating the tunnels and district courses is quite exhiliarating. I tend to crash aginst obstacles a lot, though.

The Verdict
Eagle Flight VR is a beautiful and fascinating VR game with very few flaws. Actually, I found just one so far: in the missions where your eagle needs to chase down enemies it is on the clock, which means that there are certain points in the mission where you have to have accomplished a certain feat to continue, which mostly means you need to have defeated the current wave of enemies. If you fail, the game will give you an audio and visual signal. Yet as you mentally prepare for trying the mission again (you always have to start from the beginning), the screen will turn black but your bird will fly on, causing you to crash quite involuntarily, since there is really nothing you can do to avoid it, apart from pointing your bird’s beak up towards the sky and hoping there is no tree or building in the way. That could have been done better, I think. On the other hand, if you have a stiff neck, like I did the first time I played the game, Eagle Flight VR is the perfect cure. 😉

One thought on “Fly Like An Eagle – Eagle Flight VR”