I know, I know, my initial review of Detroit: Become Human was full of praise, so you might be asking yourself: why does she suddenly hate that game?

Let’s make this clear: I don’t hate it. It’s great in its own way. But Detroit: Become Human is also a sneaky, flashy little game that, at times, pretends to be more than it is.

Choices! But, do they really matter?

My first playthrough was pretty much one long session. And while I raced through the three protagonists’ respective stories, marvelling at the thought-provoking dialogue, the setting, the conflict and stereotype characters that – because their journeys were familiar and still engaging – somehow worked despite their annoyingly cliché stories.

Okay, so when asked to paint by Carl, Markus painted himself…

Characterization
Markus is the hero, right? No doubt about it, his is the classic hero’s journey. Ripped from his familiar home he faces death and is reborn, only to travel far from home, find a damsel in distress (though North is really anything but, more on her later) and prepare his triumphant return as the fabled rA9 (Yes, I know he’s not really rA9). The clever twist of this game is, of course, that Markus can fail, if the player makes the wrong choices, can, in fact, die, like any of the heroes, except Connor, until he’s outlasted his usefulness, that is.

(BTW, did you notice that the NPCs never react to whichever question or answer you choose? Their dialogue, their response, will never vary.)

Okay. Please tell me when a person burning themself ever changed anything. In recent history. And why would an android imitate human folly, anyway?

Connor then, is the antagonist, the android deviant hunter set on a path towards either redemption (to be redeemed from what, exactly, I wonder?) and heroic deeds or damnation as he completes his mission in ending the uprising and killing Markus. His buddy-cop-story makes for some remarkable moments, sure, since Lt. Hank Anderson really is a sweet-heart and also pretty much provides the only human(e) perspective in this game.

(Carl does not count, as Carl is a classic mentor figure in this game and Kamski is just a kid playing god. And I admit that it took me quite a while to realise he had deliberately pitched those two RK800 prototypes against each other in this conflict, giving one to oppressive Cyberlife and one to liberal Carl, just to see what would happen.)

Last but not least, there is Kara. A female main protagonist! Only, her story does nothing to further the cause of the androids, does it? She doesn’t do anything except get herself and Alice into bad situations and running away. Sure, that’s also an aspect of a conflict. It’s the human side, one might say. And, of course, it’s the story of a woman who wants nothing else but to protect her “child”, to nourish it and basically be its mother (What a great role model!!!???) and an annoying brat who can’t even take off her own shoes by herself let alone climb out of a car or into a boat. 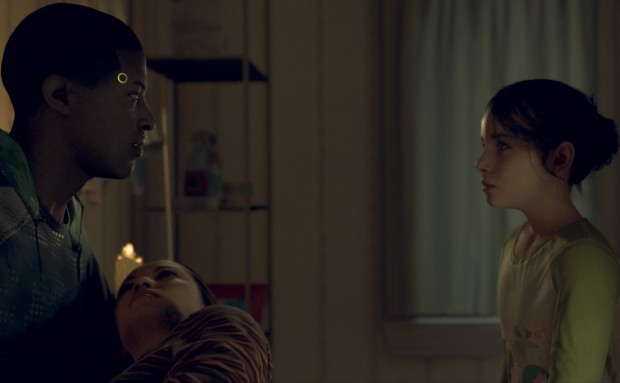 Yes, that Alice-is-an-android plot twist caught me by surprise, but if you were a little more adamant you would have noticed that when androids communicate nonverbally, the light on the LED flashes yellow… I wonder what she said to him?

(Ever interacted with kids of any age? They WANT to do things themselves! They insist, actually! They want to explore, they want to test their limits! Also, as far as product marketing goes, labelling this thing that somehow always feels sickly, either cold or hot or both, and is demanding constant attention as the perfect child without the fuss is simply ludicrous!) 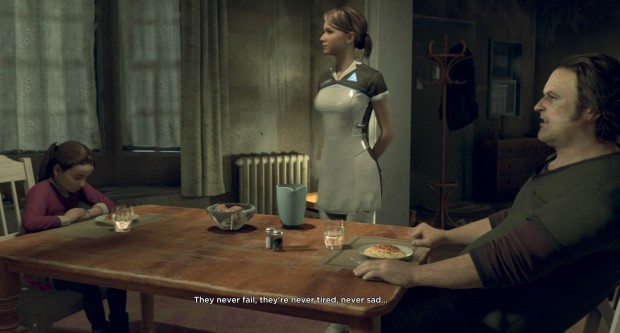 Well, of course she is a house maid and dressed like one, contrary to household android Markus… In short, I did not like the way women are depicted in this game.

All this tells me that, basically, conservative, oppressive Cyberlife (they are the bad guys, by the way, in case that wasn’t obvious before) is reinforcing sexist and racist stereotypes by producing and marketing their models the way they do, and because we are all super dense, the game really needs to rub it in.

That thing about dialogue
You know what I really loved about Deus ex: Human Revolution? The way NPCs would react differently to Adam Jensen, depending on his actions, choices, questions and answers. There is this one crucial moment, when Adam faces the mastermind behind the Augmented uprising and I was frantically trying to think of how to get him to hand me the code to disabling the station. And after a while, because I took so long, the NPC asked, quite nonchalantly at that, if the cat had gotten my tongue (or something similar). Brillant, right?

As mentioned above, Detroit: Become Human does not go that far and that is okay, because there are so many options, so many choices integrated into each mission, investigations and even observations that can change small details or even the fate of the protagonist. Quantic Dream put a lot of work into that and I praise them for it.

Unfortunately, repeating missions over and over again to hunt for clues that unlock new paths, new solutions is not my kind of fun. I am more impressed by character development and in that department, I think Detroit: Become Human is lacking. Whenever I chose one path I knew pretty much where they would be going with the character. There were no real suprises, no real growth, but simply a string of overly familiar story elements.

(Wait, there was one surprise. When Hank did not kill himself – best achievement! – and was taken hostage by the new Connor. I did not see that one coming.)

Stereotypes
The cast of Detroit: Become Human features pretty much every pop culture stereotype you can think of: the liberal artist, the wayward son, the fat, unkempt pervert, the cop broken by life, the subservient maid, the cute little girl with the soulful eyes, the overworked and overburdened boss, the cool, calculating lady boss (even though she’s an AI), the enigmatic medium (Matrix-style), the brilliant inventor who’s become a world-weary recluse playing dangerous games, the prostitute who freed herself (empowerment!) but takes charge only when the male hero dies (or fails in his role) and, last but not least, the machine that discovers it has a heart. That’s Connor, of course. In short, someone brought together all the story elements that, in the past and present, have proven successful in triggering emotion in their audience.

I fell for that mix, too. And that’s what I hate about myself.

Cheers and keep on playing!

6 thoughts on “All the things I hated about Detroit: Become Human (This is a rant, beware of SPOILERS)”