Want a game with lots of action, heart, guts, clever twists and thought-provoking dialogue? Look no further, for Detroit: Become Human is the game for you.

See, I have had high hopes for Detroit: Become Human ever since it was announced, but after having played the demo, I was no longer so sure whether or not I would enjoy it, since the hostage situation failed to engage me, emotionally. 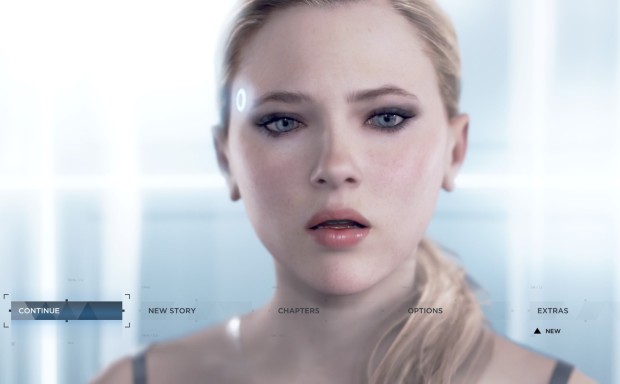 Once you have started playing Detroit: Become Human, whenever you return to the game, this Chloe-model android will interact with you on screen. The clever twist: that interaction will influence decisions you make in the later chapters. Here, I confirmed that I saw her as a friend (which is why she looks so confused), not knowing that Connor would later be forced to choose between killing a model like her or sparing its life. Having called her ‘friend’ in this interaction right here, I could not shoot her, although that would have been a classic Connor-move.

Having finished my first playthrough, all I have to say is: Congrats, Quantic Dream! I think that Detroit: Become Human is, quite simply, amazing. evenn though I felt that I was being manipulated – emotionally speaking –  more than once and the characters’ stories by themselves are pretty standard material, I find myself replaying the game over and over again, in order to unlock more of its mysteries and find answers to someunresolved questions.

(I will try to avoid major spoilers, but can’t promise there will be milder ones.)

What it is about
Detroit: Become Human follows three androids, Markus, Kara and Connor on their path towards, into and through an android uprising. 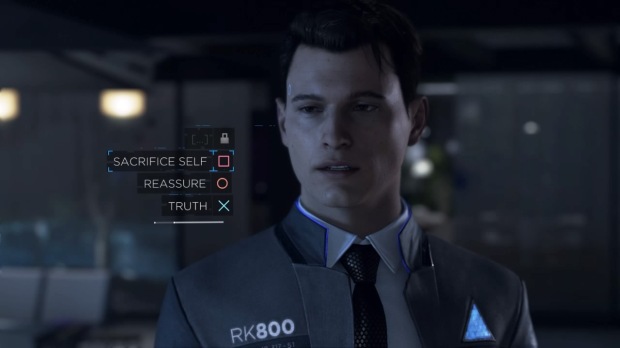 Decisions made both during dialoge and action sequences will influence the course of the game.

While their decision shape the course of the game (yes, you get to play all three of them), it is their relationships, both with humans and androids, that will influence you, the player, as to what decisions to make.

Your choices will influence the relationships the prtagonists have with their companions and even influence the public opinion. Some choices seem obvious, but it does not hurt to think carefully, before making that choice. Don’t take too much time, though, whenever you have a decision to make you will be on the clock. And if you don’t act on time, the game will choose for you.

(Sadly, most dialogue choices will elicit the same old response from your counterpart. This is a little dissappointing, but, overall, it works for me).

As I mentioned, relations are what makes this game so intriguing, so let’s have a look at the three protagonists.

The protagonists
Markus is the household android of Carl, a successful artist, and when we first meet him, it becomes readily apparent that he is a very special model. His interactions with Carl are heart-warming and fun to watch. You will fall in I love with them right away. 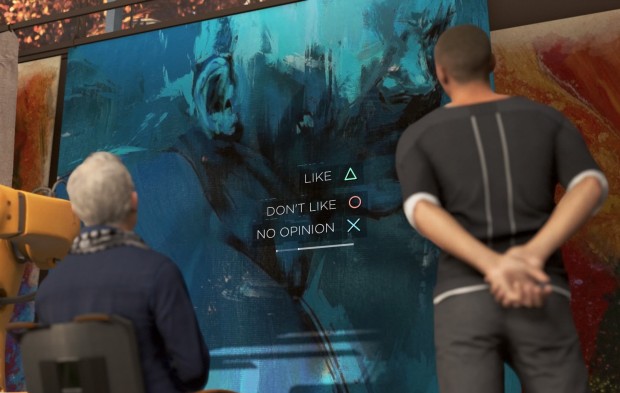 Markus is a unique model, unknown until Connor identifies it, which leads to a rather stunning revelation concerning a specific number.

It also becomes apparent early on that this model is an independently-thinking prototype. And while you play all three characters – and sometimes even two at the same time, interacting with each other in seamless transition during situations that make for some of the most amazing moments in the game – , Markus is classic hero material and will, as you know from the trailers, turn into the leader of the android movement.

(I actually thought that each one of them could become the leader and in that context the fact that the female lead’s sole desire is becoming a nurturing mother – please! – was especially galling).

Kara, another household droid, re-enters her home after having been absent for two weeks and it is clear from the start that this house is not a happy one. 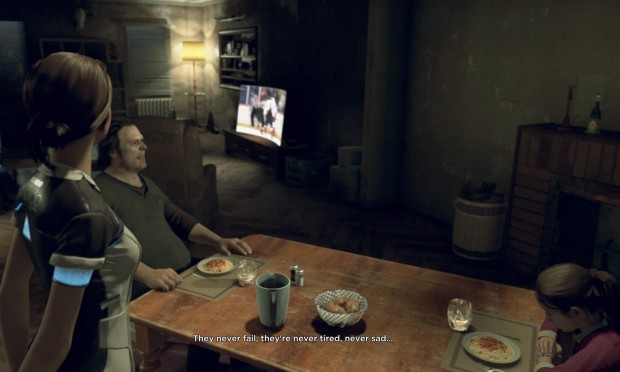 Kara’s owner Todd dislikes androids, which is why I was confused why he had one. To take care of his daughter, Alice, after his wife left him, it turns out.

Everything there made me feel uncomfortable, yet with Kara the game introduces very cleverly just what limits the androids face. When her owner, Todd, tells her not to move, she literally cannot be made to move, even by you, the player. At least not without a lot of effort and the right motivation.

Connor, the third android, is a state-of-the-art model used to investigate crimes involving deviant androids. He has been showcased in the demo and so I thought I “knew” him already. Actually, in the demo I found him quite likeable. 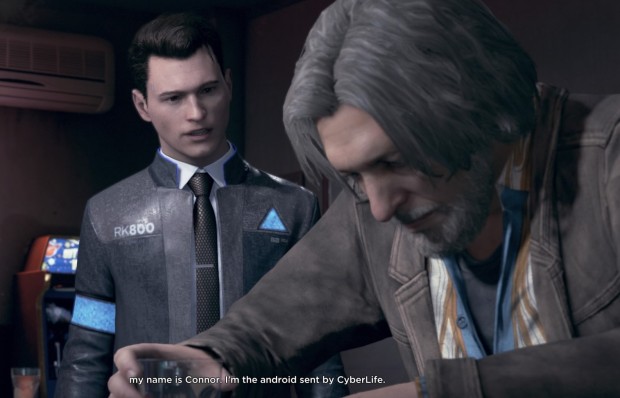 Connor seems uptight and polite, but he is a ruthless, bad-ass machine. Suffice to say that I managed to downgrade the already tense relationship with Lieutenant Hank Anderson to “Hostile”.

As it turns out, I misjudged him completely. Connor is a terrifying, unerring machine true to its programming. Yet to me, his relationships and his path made him the most intriguing character of the three. He is conflicted in a way no other protagonist is and his journey is, to my mind, the hardest. Quite tellingly, he is the only one whose interface actually shows signs of software instability. And that is all I can say at this point, without giving too much away. 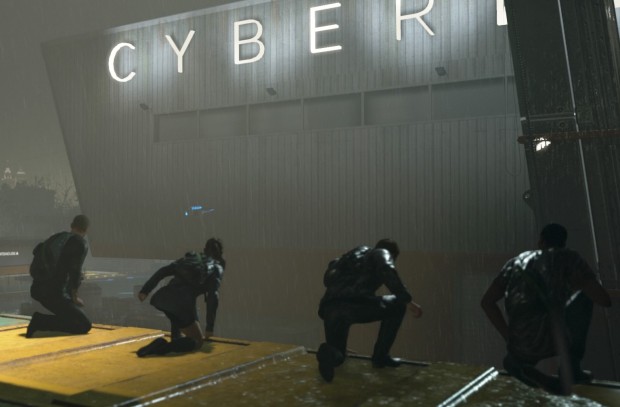 Markus, North, Josh and Simon of the android resistance break into a CyberLife-warehouse to steal much-needed supplies. You decide, whether they escape without a single shot fired, or not. This mission offered some beautiful parcour, by the way.

The gameplay
You will not be able to do much besides what the game wants you to, since you willalways have to watch out for a prompt in order to interact with your environment. While I did not mind that at all, I hate QTEs, I really do and there are a lot of those in Detroit: Become Human. Which is why I lost almost every melee fight, which cost two protagonists their lives. That’s right, I only managed to bring one of the three to the very end of the game during my first playthrough… Yet while some prompts will stay the same throughout, you will need to stay on your toes during each and every encounter, for no situation plays like a previous, similar one, which I thought amazing.

Also, the game makes clever use of the PS4-controller’s touchpad and of the controller itself. I love it!

What I did not love was the clunky maneuvering in confined spaces and the fact that the characters sometimes become stuck on furniture or corners, which led to some awkward situations.

The game is level-based (and has some pretty awesome levels at that) and the androids are restricted in their movement. Yet they can interact with part of their surroundings, fight and even parcour. They can also scan their surroundings in order to identify people, objectives and things to investigate. Both Connor and Markus are able to analyze actions and their outcomes, which helps them to plot, say, the best path up a building or chase down a criminal and reconstruct the happenings at a crime scene, in Connor’s case.

(Thinking about it, of the three Kara is the android with the least abilities, the normal one, one might say. That, combined with her story, made her the most endearing character to me. Although, I have to admit that over time it became a little less so.) 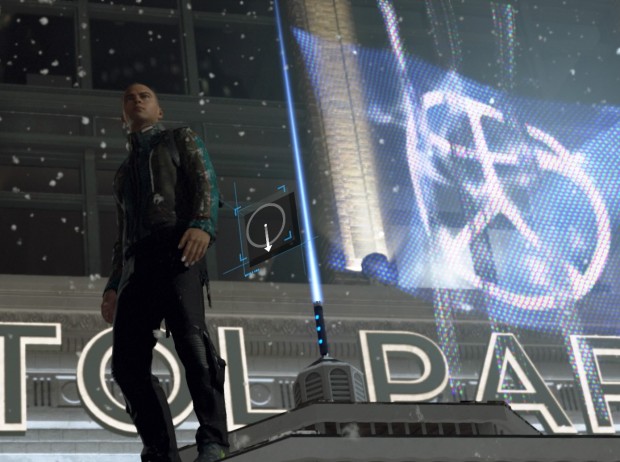 The game certainly knows how to present iconic images, but this ol’ hero-standing-next-to-flag-of-resistance-movement moment had me rolling my eyes pretty hard.

Making Decisions
Markus, as the leader of the uprising, is tasked with great responsibility. Will he lead a peaceful movement or terrorize the city? Whichever he chooses, he shapes the android people, as they follow his example.

(I chose the pacifistic approach and won the public over to the android’s cause. For a while, at least.)

Yet making those decisions will not be easy and I must say, kudos to the studio, they did not make this easy for themselves. The consequences of some decisions and actions will be devastating. Literally. And so you will question yourself constantly, whether to continue on the chosen path or not, whether you are willing to sacrifice yourself or even your companions. 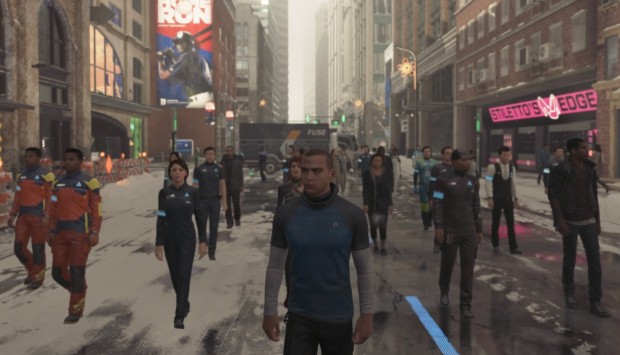 Here, Markus leads a peaceful march and demonstrates some serious hacking skills on the way, converting androids without even touching them.

I wanted the android uprising to be peaceful (I am a public relations expert, after all), even though I was pretty certain the media would not spin it that way (which it doesn’t). But that is what human relations are for. 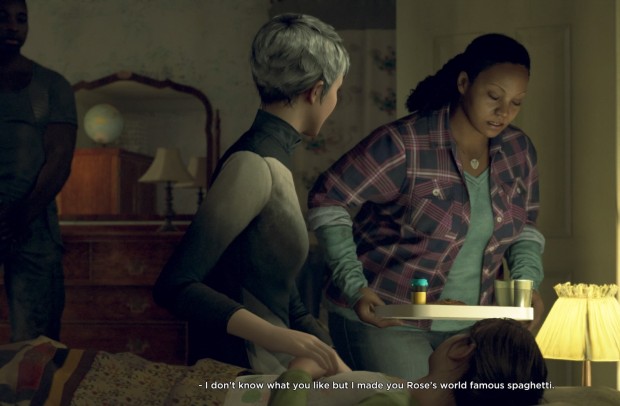 Man, my heart nearly burst when Kara’s relationship to Alice and Luther (the giant lurking in the background) was finally upgraded to “Family”.

With Kara, the decisions are pretty easy, since she has just one task and motivation: to protect and comfort Alice, the traumatized little girl I had her save at the beginning. 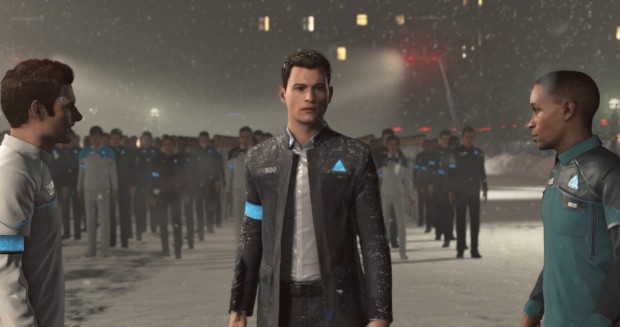 At the end of my first playthrough, Connor was the last man standing.

Connor, then, has a mission to fulfill: to stop the android uprising, find its leader and neutralize it. His decisions and actions cause misery, fear and pain among the androids. Yet he, too, has a chance at redemption. And, should he take it, which I allowed him to in my first playthrough, nothing and noone will stop him from bringing this conflict to an end.

The Verdict
This game managed to surprise me constantly and so, after a while, I gave up trying to second-guess where the writers were going with each character. Each of their stories are rich and compelling – despite the fact that Markus’s journey is the very classic hero’s journey, which made his story actually the least engaging, although it is the one that shapes the game.

When the end credits started rolling, I was sitting in front of the screen, mouth hanging open, marveling at the bitter-sweet to sad ending I had just witnessed and the guts the studio had proven in going all the way with it, and at the same time stunned by the incredible, last-minute twist that changed everything – everything – of what I thought I knew and filled me with even more questions. Those will, hopefully, be answered once I have finished a few more playthroughs.

A few weeks ago, in anticipation of this game, I wrote a little piece on androids and becoming human, doubting that a machine was capable of feeling empathy. While in my first playthrough especially Kara and, to a lesser degree, Markus both proved it is possible, Connor was denied true emotion right up to his final, logical choice.

Detroit: Become Human is an awesome game and I highly recommend it. Will you play it? If you do, here’s the big question: will you remain an obedient machine and strictly follow your programming, or will you decide to open your eyes and join the movement for android freedom and recognition as a species?

2 thoughts on “Detroit: Become Human is a bold, emotional and gritty journey that will test your resolve and morality”