I likened The Technomancer to Dragon Age Inquisition, but the level design and overall look is actually more Deus Ex-Human Revolution. It’s Cyberpunk, after all. But: you get companions.

Alan Mancer is not your friend…

Companions
Companions offer advice, fight at your side and are potential love interests. All of them will offer companion quests that help advance your relationship with them. Niesha’s quests were the most engaging, so I guess that is why I picked her as Zach’s love interest.

Amelia
Amelia is the poster girl of Abundance, a Reacher, which means she goes out exploring and brings back water and other supplies. You’ll get to know her  during one mission outside of the city and she’ll ask a favor afterward. Don’t turn her down. Her combat style of choice is blade/shield and she’s pretty tough in a fight. She’s also a potential love interest. Don’t compliment her on her temper, though!

Andrew
Andrew’s character appears to be a little bit shady at first. “Lucky” as he calls himself then, seems to have a bone to pick with your old chum Master Connor. Turns out Andrew is a potential Technomancer, unfortunately one-armed, which is why at first he’ll only be able to use a blade. You can fix that later by crafting him an artificial arm (one of the more difficult companion quests!) and give him a staff. He’s also very persuasive, so if you need to convince someone of something, better take him along. And he’s another potential love interest. He likes to be complimented as to his charm.

I know, Andrew, the helmet looks ridiculous, but not quite as ridiculous as your hair-cut.

Niesha
When you first meet her Niesha is wearing an outfit very reminiscent of what the hookers wear in Deus Ex-Human Revolution, which I thought lacked imagination, but well, so be it.  She’s a singer and a spy and she’s a rogue, meaning she uses blade and gun in combat. Once properly outfitted, she’s a real help in battle. She likes compliments too. 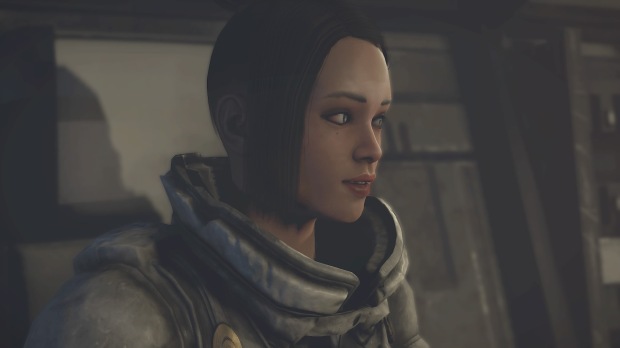 Niesha: singer, spy and rogue. Reminds me of Varric, somehow.

Phobos
Phobos is a giant mutant and a very clever and wise one at that. At one point, you’ll have to decide whether or not to keep him on the team and I chose to let him go and become a politician. It was a good choice, I think, although I sometimes would have liked to have him by my side in combat.

Don’t let that jokeresque visage fool you. Phobos is neither crazy nor bad.

Scott
Scott is not really on the team, but he offers scientific advice and comes along on his and some other companion missions. That’s all. He’s a little crazy, but then, he’s got a little secret that explains that somewhat. He’s a little fishy too. And he likes to talk.

Classes
While I like fighting with the staff, not only because it allows you to hit multiple targets at once, by the time Abundance is taken over by the ASC and the guards get outfitted with special armor, blade/gun or blade/shield are the better choices in battle. Also, don’t take Andrew along, unless you need someone convinced of your good intentions.

Blade/Gun-wielding rogues are agile and very fast. You can poison targets and shoot them from a distance, which will be especially helpful in your final fight with Victor Watcher. This class is good for fights with all types of guards, but pretty useless against the large critters. I prefer the staff to take those out. Always.

Shield/Blade is helpful when fighting gunners, but what is really awesome is the ability to parry, plus the shield bash. Use this class against heavy guards, but try to stay out of melees, if you can. 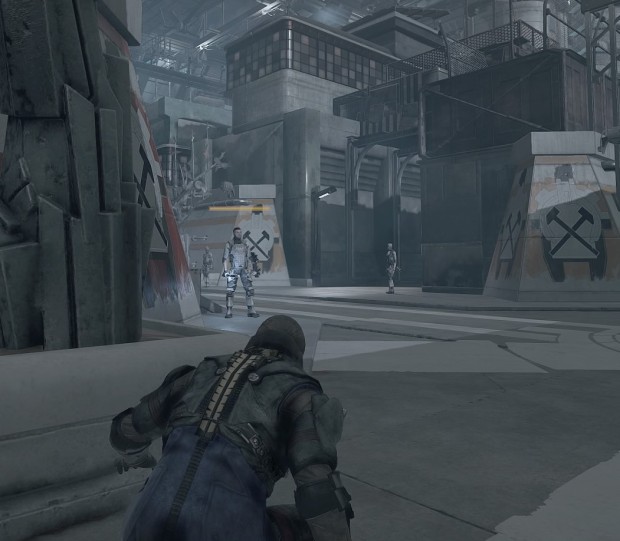 Stealth may not be key in this game, but it helps immensely if you manage to stealthily thin the ranks of potential enemies before the fight.

Combat Rules
I played on Normal and I found the combat very challenging indeed. Of course, upgrading your equipment (and that of your companions) helps, but the guards and various critters all have different abilities and weaknesses you have to find before you can attempt to defeat them. So, here are five rules that helped me persevere:

Be adaptive. If you find one battle especially hard and keep losing, try to prepare ahead, maybe use explosives to mine the battlefield before the enemy arrives.

Take out the gunners as fast as you can. Their firepower is very great indeed. And when I say “great”, I mean they’ll turn you into swiss cheese.

Use stealth to silently take out guards before you hit the rest of their squad. Upgrade that ability as soon as you can so you are able to sprint stealthily.

The environment is not your friend. First: NPCs don’t budge and that can hamper your movements immensely. I learned that the very hard way. Second: don’t let yourself be backed into a corner. You need room to dodge!

Adapt to your team’s abilities. When you’ve got Amelia and Andrew with you, opt for Blade/Gun. When you take the two ladies, Niesha and Amelia, choose the staff. But: always remember Rule One.

Have Patience. Yes, that old guy’s name is actually Patience. But, having patience also helps to avoid surprises when you are moving into enemy territory, like the ASC headquarters, for example.

3 thoughts on “The Technomancer – Companions, Classes and Combat”