I was very excited when I first heard about Hellblade-Senua’s Sacrifice by Ninja Theory. I was intrigued by the idea, by the setting and so I waited, patiently, until the game was finally released on 8th of August.

Senua’s love for Dilion is one that surpasses even death. To free his soul, she journeys into hell.

The concept and story
In the beginning, we know very little of Senua. She is a celtic warrior, fierce, angry, desperate and nevertheless full of hope that she will overcome the darkness that resides within her and fulfill her quest to save her dead lover’s soul in the Norse world of the dead, Hellheim. To do so, she must find the goddess Hella, a giantress, and bargain with her, or else, fight.

Senua suffers from a severe psychosis. She hears voices that goad her, guide her and try to cow her. And we will learn, much later in the game, who the cruellest of all belongs to and hate that voice even more for it. At least I did.

Senua sees visions, sometimes deeply disturbing and at other times of otherworldly beauty. Her mind is different. And discovering that mind was both a joy and a horror for me.

What horrors are real? And which ones are real only in Senua’s mind?

Within the very first few minutes I became enthralled by the passion with which she kept pushing on, never wavering, despite the dangers that lie ahead, despite past and present traumas that mark her deeply and that are revealed only very slowly, like peeling an onion. 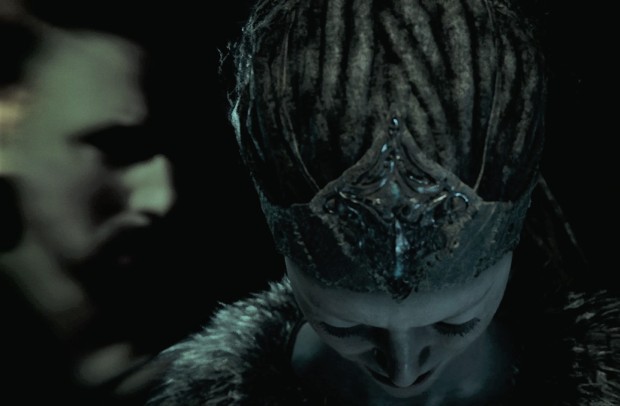 Dilion is ever-present in Senua’s thoughts, but only the last part of the game reveals what he looked like.

Take Dilion, whose skull she carries with her in a pouch. He is, for most part of the game, no more than a shadowy memory, but over time, with more and more of Senua’s story being revealed, he grows in substance, until finally we see him face to face. (BTW, I thought it curious, but also intriguing, that Senua is the only fully animated character, while the others – her lover, her mother, her father and her mentor – are played by real life actors.)

While I don’t mind the dark that much, caves make me feel claustrophobic. And there are a lot of caves to explore during Senua’s journey.

While I wanted to keep playing, because I really wanted to know what was coming, wanted to solve that next puzzle, overcome the next waves of enemies and discover even more of this mesmerizing and strangely beautiful world, I could not bring myself to play more than one or two hours at a time. After a while, I would simply find myself unable and unwilling to continue this taxing and brutal journey through hell. But, just like Senua, I persevered and was rewarded with one of the most memorable and most harrowing gaming experiences ever.

You’ll find lorestones scattered throughout the levels and can listen to Senua’s mentor telling tales of the Norsemen.

Gameplay – And a very sneaky combat system
As mentioned, Senua is a warrior, but her mind is also different, seeing patterns where others would see ordinary things. So progression through the different levels of the game is won both through combat and by solving puzzles.

Doors can be opened by finding runes, such as the one pictured above, somewhere in the surrounding objects.

Solving puzzles sounds like an easy feat, but not when you’ve got three to four different voices constantly talking at the back of your mind, shouting, whispering, pleading, taunting. To experience this fully, you’ll definitely need to wear headphones, and though it is scary at times, it’s really worth it. 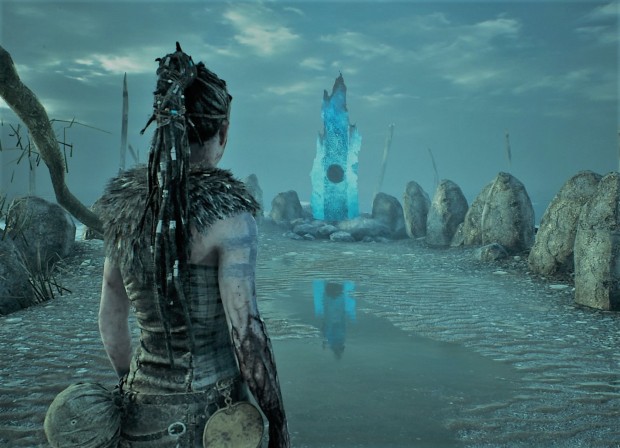 Puzzles, such as the shard puzzle by the tree, will tax your imagination.

To solve the puzzles, Senua has to find Runes throughout various, sometimes labyrinthine maps and align objects to open up new paths to get to her respective objectives. Sometimes runes will be found in the shapes formed by falling sunbeams on the ground or walls. And though the voices are annoying, they also drop hints of where and when to look and focus.

The Focus ability helps Senua see things better, but I thought that a little strange, for to me that meant that she, despite her mental condition, could choose when to see things differently and when to see them normally, while at the same time the darkness that represents her illness, would fall on her infrequently and without warning.

Focus can and should be used during combat, as it slows time and gives Senua a much needed advantage, especially when fighting a great number of enemies like in the Valley of Corpses.

Combat in Hellblade – Senua’s Sacrifice
The combat system is one of a kind, adapting itself to the player’s skills when on Auto, which I had enabled. I do not know on which difficulty I was really playing, but when I finally had to switch to Easy because I simply could not win that damn last fight in the gruesome Valley of Corpses – and, boy, was I frustrated, my neighbors must have heard me screaming with rage through the walls! – , things suddenly became much, much easier. I thought that very impressive, actually. Nevertheless, I kept the difficulty on Easy until the very end of the game…

Now, very mild spoiler ahead, but you are supposed to lose the very first fight. I knew that. And so I wondered what would happen when I, after having gained tons of fighting experience throughout my first playthrough, went at that one again. I was sure that I would beat the deer-skull-headed warriors easily. And I did.

And guess what the game did then? It cheated.

That’s right. You see, the better you are at fighting, the more enemies will come at you and the more, the more difficult, like the agile ram-heads and mace-bearers up to the well-protected yet slow shield-bearers and the awesome red-headed giants you cannot melee but need to attack from behind. Always.

While the sword-wielding deer-skulls are okay to beat but tend to come in numbers and try and surround you, the ram-headed warrior in particular is nasty. Wielding two light axes this foe is not only able to perform a ranged attack, but is also lithe on his feet and will turn into an untouchable wraith if you get too close to defeating it. You have to use the Focus ability to see through that illusion to take it out. I learned that the hard way.

But in that first fight that guy doesn’t show up. These are the deer-skulls. Easy, see? But when I refused to lose, the game finally threw three deer-heads at me that took on that same wraith form and kept it. And I was not even allowed to use the Focus ability! 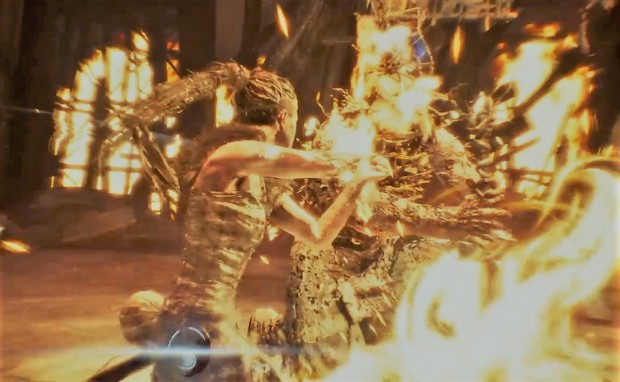 The first challenge to overcome are two boss fights, one against a Fire Giant, above, the other against a raven-like god.

Apart from the boss fights, some easy to win, others not, Senua is frequently being attacked by creepy Norse warriors wearing animal skulls instead of heads. Some of them come at her with swords, some with axes, some employ ranged attacks, some are slow and powerful, others very fast.

I know who’s not going to make it off that bridge… Senua really is a kick-ass warrior.

Over time, you’ll learn how to deal with them, will get to know their moves, their strengths and weaknesses. By the end of the game I had become pretty adept at using sprint and melee attack to throw my enemies off balance and finish them with heavy attacks, which proved especially effective against the shield bearers.

Oh, and I really enjoyed kicking them off bridges into the abyss, when the opportunity presented itself.

Fenrir is the last boss to overcome before the final battle in Hella’s halls and it truly is a ferocious beast. We shall see how I fare against it on Auto difficulty, which will be Hard, I presume.

My hardest battle (on Easy) had to be the one against Fenrir, a huge monster that hides in shadows and strikes with impressive, terrifying force. Anticipating where it would strike from, was, to me, the greater mental challenge than trying to hit it in actual combat.

As for the very last battle… I kept fighting and fighting, not wanting to give up even though I knew I could not win. Not even on Easy.

Hellblade – Senua’s Sacrifice is a beautiful, scary monster of a game.

The Verdict
Was it worth the wait? Yes, definitely.

It’s hard, it’s strange, it’s beautiful. The sound design is incredible and Melina Juergens as Senua had me cheering for her even in her darkest moments.

I think it’s excellent and I will be sure to play it again, once I’ve recovered from my first playthrough, that is.

4 thoughts on “Hellblade- Senua’s Sacrifice – A Journey Through Hell”