Now we’re cooking! So, the third episode of The Council finally – FINALLY – moves the story forward and reveals some of the secrets that have been lurking on the edges of the plot so far. Since it was ultra hot these past few weeks and my apartment is a furnace during summertime anyways, which will get even worse when the PS4 is turned on for hours on end, I played the four chapters only once so far, as Diplomat.

There will be SPOILERS. 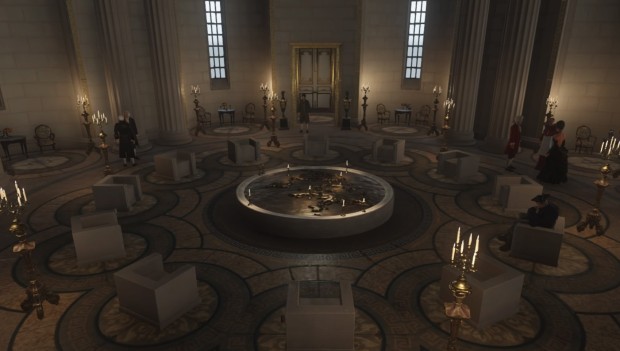 I love the settings! This is the room where the conference takes place. Glorious, right?

Why I liked this episode
It’s saying something when you begin to care for the main protagonist’s story only halfway through the game (there are five episodes to The Council in total). But then, so much is happening in this episode! A very pleasant surprise, compared to the confusing and rather pointless last one that bascially served as set-up for this one, but offered no real revelations, plot-wise.

Why is that so? Because this episode has structure. And with structure I mean exposition, plotpoint A, plotpoint B, climax/confrontation and ending or, in this case, a cliffhanger. Which is okay, this is an episodic adventure, after all.

Louis has to make a choice and sides with Sir Holm. Not with the host.

Negotiations and murder
So, in the beginning the stakes are being raised – at last! – and Louis has to make a significant choice: During the conclave, does he take the side of Lord Mortimer, the host, or does he side with Sir Holm? Now, mind you, I did not trust Holm to begin with, not since I found out in the first episode that he sought to buy the very dangerous book Louis and his mother got back from von Borchert in the prologue of the game.

Nevertheless, I opted for Holm – and, boy was that an intense negotiation session! – , just to see where that will lead (my next playthrough will definitely see me go with Mortimer). Once the first meeting of the conclave was concluded, everyone except for Napoleon Bonaparte and George Washington chose to oppose Mortimer. 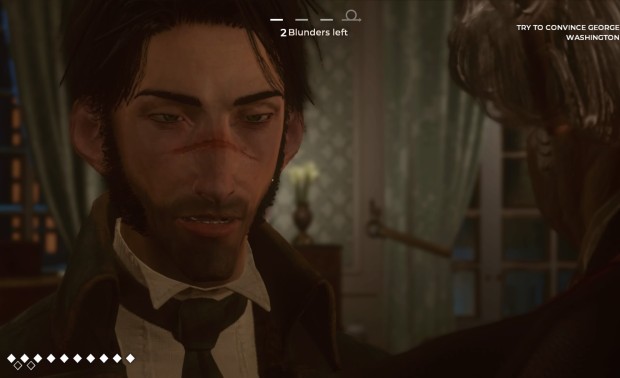 You can do it, Louis!

Louis is then tasked with persuading Washington to join in and I did succeed during that particular Confrontation, of which I was pretty proud.

The prelude to the out-of-body episode involves Lady Hillsborough, by the way. And what you choose to do is of utmost importance later on.

Louis suffers another out-of-body-episode, taking over von Wöllner’s body instead of a servant, this time. But Holm seems to somehow sense he’s there and sends him back to his own, sleeping body. Strange? You bet! I will be coming back to that later.

Perú already displayed a rather fatalistic attitude in the last episode and while I was initially thinking he’d try to kill Mortimer, I then remembered how afraid he was for his daughter.

Then – bam! – plotpoint A: Jacques Perú’s conscience gets the better of him and on the second day of the conclave he threatens to kill himself. I, as Louis, managed to talk him out of it, for which Louis gets a lot of praise. It also made me feel good, somehow, but then, I’d decided to treat Perú kindly all the time, in the hopes that it’ll pay off in the future. We shall see about that…

While Jacques Perú is being confined in his quarters for his own safety, something strange is going on in Emily Hillsborough’s room. And as Louis investigates – boom! – it’s plotpoint B! For Emma, Emily’s twin sister, makes an appearance and Louis’ mother, Sarah, is also back. Stand-off! 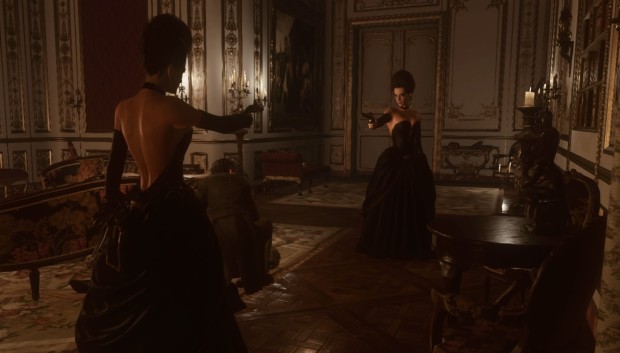 Will the real Emily please – uhm – lie down?

Since the twins are true mirror images of one another, Louis is tasked with identifying the real Emily, which I – hopefully – managed. Once Emma is taken care of – wasn’t she shot by Sarah before? And what happened that Emma managed to bring Sarah back to the mansion? Or did Sarah come to her room, believing she was Emily? So many questions!, – Louis and his mother take off, while Emily is whisked away to god knows where once her crime is discovered. 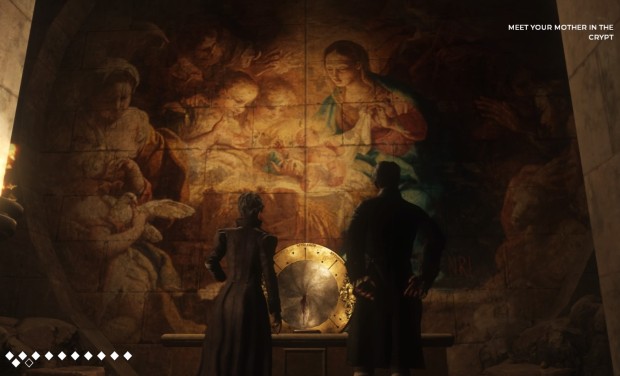 The crypt depicts the birth of Christ, but I am convinced it is his death that is the key. Why? Spears, remember?

There be demons
In the last chapter of the episode, Louis meets with his mother and finally learns how she lost her hand. There is a secret hidden beneath the pavillon in the garden and Louis now has to gather a few ingredients to attempt to solve the deadly riddle that guards that treasure. Which is pretty easy – the gathering of items, not the riddles – , except for the Confrontation with Washington in the tower room, maybe.

Louis has to go beyond the nightmare again and this time has the code to get back out again. I won’t post it here, ’cause it changes.

Now, during that episode, Sarah reveals that Lord Mortimer and Sir Holm are, in fact, ancient demons, capable of controlling the minds of humans. 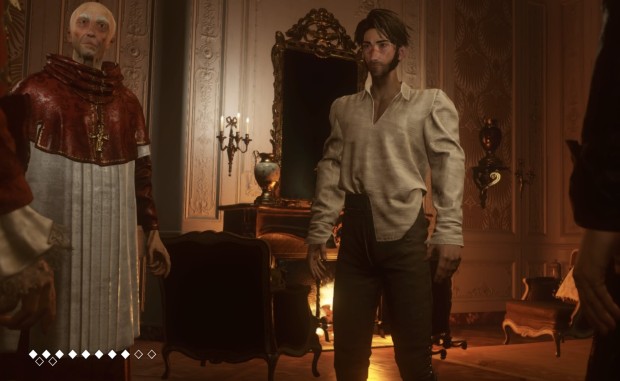 Seomething causes Louis to leave his own body to invade another, appearing with his shirt half hanging out of his trousers to indicate he is actually sleeping, I guess. Here, he has taken over von Wöllner’s body. Unfortunately, Holm takes notice.

Yet, when asked, Sarah denies any intimacy between her and any one of the two. Do I believe that? Nope. Why would any one of the demons slip into Louis’ mind just to use him to invade yet another person’s body and spy on the other one? Doesn’t make sense to me. Aaaaand, Sarah does mention in the prologue (if you choose to trust her), that Louis is way more important than he thinks. So, is Louis half-demon? We shall see, won’t we?

Daddy? Is that you?

Finally, did you keep your hand in the end, or did you lose it? What happened to mine? All shall be revealed when the next episode is out.