Ubisoft published The Division and Far Cry Primal pretty much the same week and since I could not decide, I started to play both at the same time.

I expected Tom Clancy’s The Division to be much like another Ubisoft title I played and enjoyed, which was Tom Clancy’s Splinter Cell -The Blacklist, and yep, that’s exacly what I got. Of Far Cry Primal I did not expect anything at all, since I’ve never played the series before.

Setting
Setting-wise, these two titles could not be any more different. One, The Division, is set in post-modern day Manhattan, the other in prehistoric Europe, in a land called Oros. In both games the main protagonist has to explore and pacify hostile districts, gather tools and resources to upgrade gear and enlist specialists to ensure the wellbeing of the people entrusted into their care. These people being the survivors of a smallpox epidemic (The Division) and the primitive Wenja tribe (Far Cry Primal) respectively. 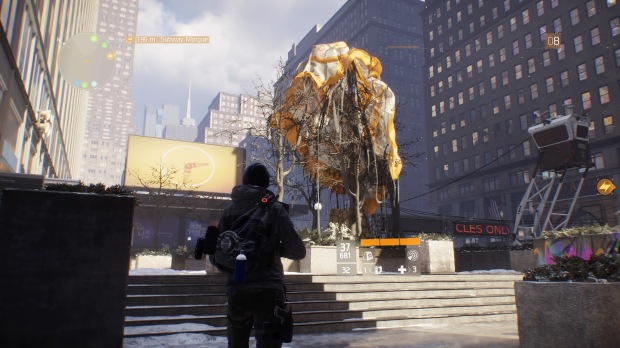 The Division is the last line of defending civilization in Manhattan.

While The Division features a derelict city strongly reminsicent of the cities seen in The Last of Us, with all the possibilities and limitations of a strictly urban playground, Far Cry Primal, to my mind, has the advantage in terms of setting, since it features not only different environments, ranging from lush forests to bleak tundras, but also offers a variety of fauna and flora waiting to be hunted and explored. This could be 1 point for Far Cry Primal, were it not for the extremely rich details of Manhattan and the sometimes not quite that perfect graphics of Far Cry Primal.

Beautiful, but not as good as The Divison are the graphics of Far Cry Primal.

Story and characterization
A smallpox epidemic has wiped out civilization in Manhattan and The Division, a very secret elite force of sleeper agents, is activated to salvage what can be saved and bring order to the island. The game starts off with a real bang and players get to choose their own avatar, there really is no characterization and no character development, but total immersion. You are responsible for helping the people of Manhattan, not some fictional character. Players have to accomplish different missions and recruit specialists that help them find a cure for the epidemic and restore order. There is no real interaction with characters, unfortunately, but then, story is not what makes this game such a fun ride.

After the first tutorial mission of Far Cry Primal, I thought this was going to be all about Takkar, the game’s main protagonist, fighting his way across some prehistoric wilderness in order to find the land of Oros to reunite with his people, the Wenja. Well, it is not. Story-wise, the beginning was not as engaging as The Division and I very quickly got bored of collecting plants and fighting enemy warriors and deadly beasts alike. For a while the only highlight was roaming the forests, hunting prey. Takkar himself is not the most interesting character, in fact, we know little about him, apart from his being bent on uniting the Wenja and defeating their enemies. And that’s pretty much all there is to say in terms of characterization. But, Takkar meets and gets insulted by all kinds of illustrious characters who will join his tribe over time. These are, of course, the specialists I mentioned before, but, contrary to The Division, they all offer personal quests that really make the player care for their fate. And: Takkar is a beastmaster, who can enlist animals to be his eyes, his shield and his weapon. Which is really cool!

I prefer the feline companions like this cave lion here.

Missions and gameplay
The Division is all about “Go there, shoot the bad guys, survive and retrieve that”, assuming you know how to get into cover, stay there and aim correctly. While the atmospheric settings – awfully reminiscent to those of Splinter Cell -The Blacklist (shopping center featuring Christmas decoration, anyone?)- differ, the gameplay itself does not. Unfortunately, I need a lot of time to acquaint myself with the controls. I still do not have the hang of actually staying in cover, even after roughly ten hours of intense gameplay. Mind you, I am better now at aiming and shooting people. Which is one thing I really do not like about The Division: there’s no way to take out enemies without dropping bodies. But then, stealth is not what makes this game such a fun ride. For one, the AI is not forgiving. If you repeat a mission in single player mode, do not expect to find your adversaries in the same places as before. Which is really, really good.

Cover is essential in The Divison. At any time.

Far Cry Primal‘s missions, “Go there, kill everyone, claim the bonfire/loot/target” are equally repetitive. Especially the two missions where Takkar is first introduced to the two main bosses. Yet, and that is a difference, you do have the opportunity to kill people stealthily and are also awarded bonus XP, if you do clear a stronghold of enemies without being detected. Which is very Assassin’s Creed. There is even one scene, where one of your acquaintances performs a Leap of Faith and lands in a haystack, albeit not as elegantly as the protagonists of that other Ubisoft-franchise. Gamesradar.com has found even more Assassin’s Creed easter eggs. I really like the stealth elements of Far Cry Primal, yet combat-wise the first-person-perspective is somewhat cruel. Still, more of a challenge than The Division.

Don’t play with fire… Thanks for reminding me, Far Cry Primal.

Co-op vs Single player
Unfair, Far Cry Primal does not even feature co-op, you might say. But that’s not quite the point. Far Cry Primal features numerous predators that beastmaster Takkar is able to tame, ranking from stealthy rogues to powerful tanks. Whichever style you choose, you get your pick of companion. There are, for example, the beasts of the canine species, which help you uncover more terrain and warn you of dangers nearby. They also fend off lesser predators. There are stealthy felines that support you in hostile territory, without raising alarm. And there are ursines that have all the qualities of a tank, drawing attention to themselves and offering you a chance to strike. And there is the owl, the very first of Takkar’s animal companions, which can tag enemies and even strike them down, like a true hunting bird. The beauty of the game, of course, is that you are not obliged to using any of these predators. But if you do, the beast becomes your buddy and you will come to its rescue, if it is hurt.

In The Division you can team up with up to three other players at any time. If you do, your enemies will level up to whoever’s got the highest level and there will be many, many more hostiles than if you did the mission as a single player. I’ve played through lots of harsh encounters that way, but this is where The Division really excels. I usually prefer single player, but The Division is so much more of a challenge in co-op, and it is much more fun. I have had such a great time with so many different players, who were both patient and so much more optimistic than I was. Thanks for pulling me through. And I have to apologize to whoever played Brooklyn’s last tutorial mission with me, because I was really, really bad at keeping a low profile… Sorry for that. Rest assured, I am much better at this now. And co-op is exactly why this game is such a fun ride.

So, 1 point goes to The Division.

Far Cry Primal wins this one
The Divsion is a great game and I really love it for the intensity of the co-op missions.  But the missions themselves are repetitive and I do not even care if my avatar bites the dust. Far Cry Primal features the more engaging storyline. In fact, I’ve got only a few missions left before I get to finish Far Cry Primal, which I have been playing into the small hours, and I have yet to explore tons of streets in The Division. So, actually, for me, it’s a win-win situation.

1. Being trampled by mammoths
Mammoths are usually gentle giants, you can sneak between them, hell, you can even ride a young mammoth, once you’ve unlocked that skill. Just never come close to the herd while in the company of one of your tamed beasts. Bears especially. If you do, they will attack immediately. So, if you are not in the mood for a hunt, best give them a wide berth. The same goes for woolly rhinos.

2. Setting your camp on fire
Fire is good, fire is your friend, especially at night, when predators roam aplenty, or when attacking an enemy camp. But when you light a campsite fire, you better use your flintstones. Because, if you simply ignite a club and use it to torch the camp’s fireplace, chances are you’ll also roast the rest of the camp, yourself included.

3. Not paying attention to your owl
I managed to make my owl commit aerial suicide by smacking it headfirst into the side of a cliff, because I was so engrossed in the sense of flight and intently watching the ground below. It does not happen that often anymore, but managing the owl and checking for prey or enemies at the same time can be taxing.

4. Losing yourself in the heat of battle
High gras and thick vegetation will conceal you from prying eyes, but that is also true for your enemies. So sometimes a chance encounter with enemy hunters can become quite hectic, with you trying to constantly keep track of all your foes, beasts and humans alike. The first-person perspective does not help either. Which is why I accidentally shot one of my Wenja brothers dead, mistaking him for an enemy, right after I had thought I’d saved him.

5.Taking your beasts’ loyalty for granted
In one mission, where I had to defend  a bunch of fellow Wenja from enemy attackers, I thought myself pretty clever. After all, I had brought the most powerful tank in my arsenal, a very big, very terrifying bear, with me. They really stood no chance against that beast and my arrows. Yet, for reasons I have still not managed to understand, said bear turned on me during the ensuing fight. I was lucky the beast was killed by the enemy before it could kill me.

Also, beware of snakes. They hide in the grass and warn you of their presence by hissing loudly. Heed that warning.

What’s your take on these two games?

2 thoughts on “Far Cry Primal vs The Division”