The second episode of Hitman is out! Set in sunny Sapienza, jewel of the Amalfi coast in Italy, it does up the ante in comparison to the Paris fashion show. Why? Well, for one, there are three targets instead of two (two hits, one virus to be destroyed) and second, getting to your targets is not as easy as it was in Paris.  Though “easy” might be the wrong term…

In the beginning
This is the first title of the Hitman-franchise I have played so far and it is a blast! Set twenty years in the past, the prologue offers a very nicely done tutorial mission, which manages to explain all the tools of the trade without ever becoming boring. Agent 47 has to eliminate a master thief and to do so must infiltrate a yacht. Which is no easy feat, let me tell you!

After getting accustomed to all the disguises and possibilities I dared myself to complete the graduate mission and found it very challenging indeed. Which was why I was kind of reluctant to try on Paris, when it came out. As it is, I persevered and by now am enjoying myself immensely exploring the world of Hitman.

What I love about Hitman is the variety of tools at Agent 47’s disposal. You can either make the kill very personal or strike from a distance. Of course, I also cherish the fact that you are never obliged to kill NPCs, something I came to loath in some of the Assassin’s Creed games. I mean, what is the point of killing three spotters when you could have avoided them altogether, had you been given more freedom in how you approach the mission? So, freedom is the word here. Hitman is a sandbox and you can go about fulfilling your task any way you like. Of course, you will learn very quickly that keeping a low profile will serve you best. Which is just the way I like it.

So, on to the gameplay.

Episode 1, Paris Showstopper
In Paris, you need to eliminate one Victor Novikov, owner of the Sanguine fashion label and head of a criminal organization called IAGO, yes, exactly, that guy from Othello, and his wife, former super model Dalia Margolis. While Victor walks around the ground floor trailed by his one bodyguard, Dalia is on the uppermost floor hosting an auction and is being very well guarded.

Mix it, baby! Serving a cocktail mixed with rat poison will put Victor Novikov at your mercy.

I have earned every single trophy in Paris, Victor and Dalia have died countless times, the elusive target is also down and by now I am so familiar with the setting that I am able to complete the hits in under five minutes and walk away unnoticed.

Time of Death – I electrocuted Victor by tampering with some cables.

One achievement I have yet to claim is the Sniper Assassin-achievment, because I was spotted while performing the In Plain Sight-achievement, where you have to shoot both targets with a sniper rifle within ten seconds of one another while they are both watching some fireworks. 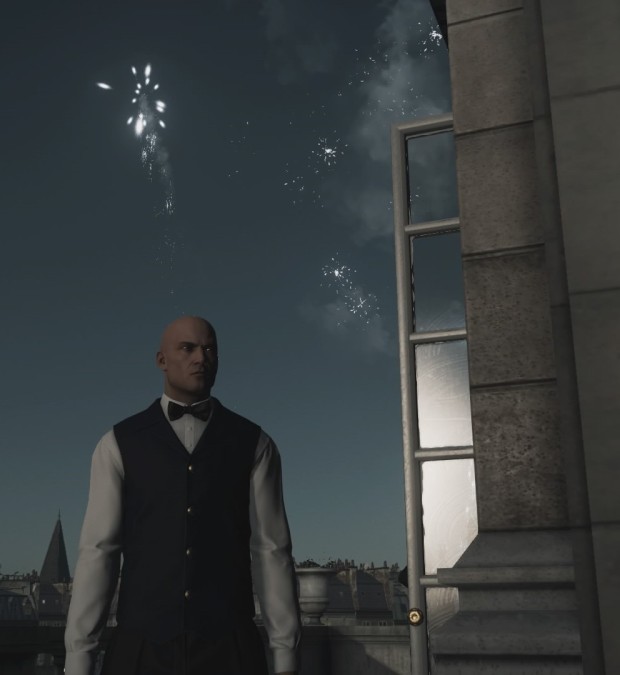 So, I really enjoyed Paris. The setting was glamorous, the music cool and the conversations between NPCs entertaining. While I honestly can’t recall how many times I have played that episode, I remember this one night a friend of mine called in the middle of it and the conversation went as follows:

“Hey, how are you?”
“Sorry, can’t talk, have to finish this kill.”
“Excuse me?!”
“I’m playing Hitman and I have to eliminate this couple during a fashion show. Right now I am trying to drop a loudspeaker on this guy and I have to time this right, so…”
(pause) “You’re nuts.”

Happy days. Or rather, nights.

There are a few more achievements left that I have yet to claim, but now that the Sapienza-episode is out, they will have to wait.

Episode 2, Sapienza, The world of tomorrow
Sapienza! It truly feels like a holiday, with the Mediterrean sun glaring down on beautifully crafted houses and streets. Birds are singing, people are talking and Agent 47 has to figure out how to get to his targets. Both are located in a heavily guarded villa, one of them, Silvio Caruso, is walking around almost the entire premises, the other, Francesca de Santis, keeps to the uppermost floor, unless you trigger an event to draw her out. But first you have to find out how to do that. Plus, you have to destroy some super virus both your targets are working on. Which means there is a lab somewhere and you need to find a way in.

Why so serious? – I thought killing my targets disguised as a clown would gain me some secret achievement. It didn’t.

The very first challenge, and that is the fun part, is finding all the disguises needed to infiltrate the villa and the lab. You can also infiltrate the house wearing no disguise at all, of course, but so far I have been too impatient or clumsy to pull that one off. So what I did was put on my suit and shoot both targets with my sniper rifle without having to infiltrate at all. To do that, I hid the sniper rifle in the canalisation close to the church, equipped a lock pick and, with the rifle slung across my back, snuck up the church tower and placed the weapon there, snuck back down, ran across the town, triggered the event that would lure Francesca out of the house and onto the pier, went back to my little sniper’s nest and performed the Eye From An Eye-achievement to take out Silvio. Then I merely had to wait for Francesca to arrive at the pier to shoot her and make my way back down before the guards could spot me. I’ve read that some people find aiming with the sniper rifle hard, but while it is that, I imagine it should be. 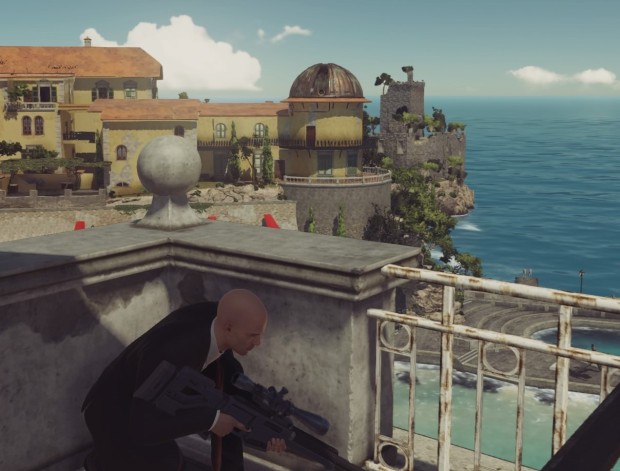 Getting comfortable in my sniper’s nest.

Sapienza is harder to complete than Paris, because of the three targets – I spent a long time searching for that lab, I tell you! Yet it becomes easier with time, though not that easy. And, judging from the difficulty level of the last level of the first Sapienza Escalated-mission I did, I am somewhat dreading the next episode, Marrakesh, which is out on May 31st according to Eurogamer’s gameplay review (see below). I can’t wait! Hoping your are enjoying yourselves as much as I do!

BTW: I usually try to avoid consulting online sources to help me unlock an achievement, but Hitman is one of these games where I find myself lacking in imagination. There is only one game where I needed to consult online forums this often and that one was Castlevania: Lords of Shadow 2.