Having played a lot of shooters this year (namely SNIPER ELITE III and SNIPER ELITE 4, Sniper: Ghost Warrior 3, Ghost Recon Wildlands, Wolfenstein – The New Order and Wolfenstein II – The New Collossus) I found myself craving a change of scenery, which, for me, means stealth.

Since I had already finished the badass Dishonored: Death of the Outsider and the excellent new HITMAN-campaign “Patient Zero”, I initially decided to pay another visit to The City in the Thief-Reboot. Yet, though I really like this game, I wanted something new.

This is what I found:

Meet the Aragami
In Aragami, an Indie game (by Spanish start up Lince Works and Two Feathers) first published in October 2016, you are the Aragami, a nameless shadow wraith (hence the game’s tag-line Control the Shadows) drawn into the world by an ancient ritual and thanks to a girl named Yamiko. The story is set in an alternate universe feudal Japan.

Girlish Yamiko is more than she seems.

While I was pretty sure (or, rather, hoped) there’d be more to the story, I was nevertheless intrigued by the prospect of a protagonist with no memory whatsoever. Something that just is. Something that does not view the world surrounding it in any context at all. Needless to say, there actually is more to the story than that and I am grateful for it. 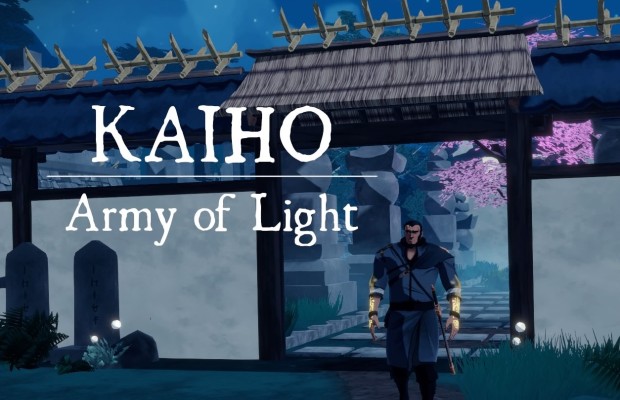 Beware the Kaiho soldiers as one hit from their light weapons will kill you instantly.

The Aragami – which is a vengeful ghost, I should mention – is tasked with freeing Yamiko from the dungeon where her enemies have imprisoned her. To do so, it has to collect a few talismans and tokens of Yamiko’s past which, it turns out, is tied to its own. Indeed, the Aragami is a soul reincarnated.

Unfortunately, its shadow form will dissipate with the light of dawn. That’s right. You have one harrowing, beautifully written and beautifully designed night ahead, during which you have to sneak through graveyards, temples, military encampments and a closely guarded city.

The maps are true works of art and this one, the city, was my favorite map both in terms of challenging stealth as well as beautiful surroundings.

The story
Aragami, I should also mention, was originally supposed to be called Twin Souls: Path of Shadows. It is the work of a couple of former students of the Master in Game Creation class at Universitat Pompeu Fabrais and is the follow-up to the student work Path of Shadows. So my expectations were quite low.

Yet the story is what kept me going, apart from the pretty awesome stealth gameplay and truly stunning artwork, that is.

I love this skin with the Punisher-like look.

Who the hell is the Aragami? That was bugging me for a sweet long time. You see, throughout the game you’ll encounter numerous visions hinting at our protagonist’s past, and at one point you will have two suspects.

If you are into the usual mechanics of storytelling you’ll know who he’ll turn out to be in the end. And though I was sure, I still wanted to know how this would end.

Friend or foe? Either way, he is a deadly adversary.

The gameplay
You liked Dishonored? Then you’ll love Aragami. The Aragami is a creature of shadows and is therefore able to use Shadow Essence, which is very similar to the Chaos powers granted by Dishonored‘s Outsider.

These powers allow the Aragami to teleport from shadow to shadow, to create shadows to sneak up to or past unsuspecting guards, summon a dragon that eats its enemies or throw shadow bolts that kill.

The techniques are seperated into Aragami skills, defensive and offensive techniques. Personally, I initially went for the defensive ones.

There’s a fairly decent skill tree, actually, that I still have to explore fully. The good thing: Once you have finished the game and start a new one, you start with all your abilities still active.

Though it is a huge full moon, moonlight does not affect the Aragami. No, actually, it does, so be careful.

Stealth is paramount in this game, since even just one hit from an enemy is deadly. Beware, as there are guards everywhere, sword-bearers and, as you progess, archers as well as light barriers you have to disable before you can pass them. So, you see, you’ll have to choose your path and approach carefully. 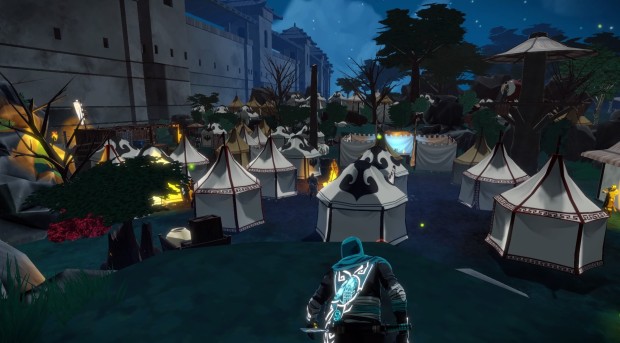 This military encampment is just the beginning of the excellent infiltration mission into the city.

I played this on Normal and I found it very hard indeed. I am, I should mention, not the most patient of gamers. But it nevertheless feels incredibly satisfying if you manage one chapter and remain undeteced throughout. Also, your performance per chapter is ranked from A (very good) to S (really bad). And of course I will try to achieve rank A in every one of the chapters!

You gain seals for playing as a ghost (“Yurei”) and remaining undetected throughout a chapter, for playing as a Pacifist (“Kami”) and not killing a single enemy or as Predator (“Omi”) for leaving no potential witness alive.

To gain skill points you have to find scrolls hidden throughout the levels. But, don’t worry, you can rely on your trusted raven friend to uncover those for you, as soon as you have upgraded its skills.

Get killed while performing a stealth kill and you’ll be awarded the Dishonored-Achievement. Sweet!

The Verdict
Remember, this is an Indie game. And though that is noticeable in the textures, above all, the awesome, colorful artwork more than makes up for that. It is a truly beautiful game and the stealth is truly taxing (especially during the penultimate chapter, where lightning will frequently erase every conveniently and strategically placed shadow as you approach the temple under the vigilant gaze of a master archer).

I have finished the game both in single player and coop (you need to use party-chat to communicate with your partner on PS4) and am looking forward to more titles from this particular studio.

Now, if anyone wants to play this with me, I am game.

Anyone up for a game?